Mobile Suit Gundam: Encounters in Space is a Third-person shooter video game for the PlayStation 2 released in 2003. The game is centered on space based mobile suit combat. Developed and published by Bandai, the game is based on the Universal Century timeline of the popular Gundam franchise.

Rather than tell a single continuous story, the single-player game in Encounters in Space is broken up into a few short vignettes that take place over the course of four years. These vignettes are accounts of several significant battles during and after the One Year War between the Earth Federation and the Principality of Zeon.

The game takes place entirely in Outer Space, although the Moon, space colonies, and asteroids are sometimes visited. The player pilots a wide variety of Mobile Suits, Mobile Armors, and other spacecraft throughout several different zero gravity environments. Also thrusters can be used to give these mobile weapons a temporary boost in speed and maneuverability. These vehicles can move forward, backward, and side to side using the left analog stick and can move up and down using the R1 and R2 buttons, allowing for 360 degree combat. The game is mostly free roaming, although a few rail shooter sections are commonly encountered.

Players choose from a large assortment of different main, sub, and melee weapons that very greatly between different units. Certain crafts are also equipped with a special attack, which can be activated once a special meter has been filled. The game is divided into several different story modes, each corresponding to a different pilot or setting. These pilots range from main characters of the original Gundam series to lesser known pilots from the Gundam manga. The game also includes a two player multiplayer vs. mode. Players can also play against AI units in multiplayer. Finally there is a mode where players can create their own unique pilots for use in multiplayer. 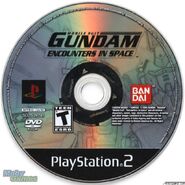