The campaign of Cross Dimension 0079 is split into two parts. The first follows the story of Amuro Ray and the events of the Mobile Suit Gundam film trilogy. This rendition is cursory and only highlights very specific events from the series. Dialogue is generally minimal and animated cutscenes are infrequent. The musical score is also all original, giving Char a new theme music. The style of the tracks more closely resembles a Japanese roleplaying game than a traditional Gundam score. Most of the emphasis of the story is placed on Char Aznable and the encounters he has with Amuro Ray. Each such encounter has a corresponding battle in the game. Characters such as the Black Tri-Stars and Ramba Ral only make appearances for a single mission. The missions begin with the activation of Gundam at Side 7 and ends at the battle between Gundam and the Zeong at A Baoa Qu.

The second half of the game was an original story titled Prayers for the Dying, and follows an encounter between the Federation Albatross Transportation Unit and Zeon Wolf Gar Team.

Part 2: Prayers for the Dying

On October 9, U.C. 0079, five days after the death of Garma Zabi, the Wolf Gar Team, a Zeon special forces unit mostly made up of former criminals, were separated from the main force after they were defeated by the Earth Federation's silk road counterattack, Operation Desert Dragon. Lost in the in the Gobi Desert, they eventually discovered the Albatross base, a Federation supply base, and attempted to raid it for supplies. This failed save for ammunition, however, after inflicting damage on the base, they discover a Gundam, the RX-78XX Gundam Pixy. They failed to capture it, however after seeing it in action they made repeated unsuccessful attempts to capture the mobile suit. These attempts end poorly for the Zeon as the Gundam Pixy proves itself a far superior mobile suit to even the Wolf Gar leader's MS-08TX Efreet.

Meanwhile, Captain Bork Cry at the Albatross base was forced to deal with his obstructive superior, Noct Gaddish, who refused to have him pilot the Pixy and forced him and his team to pilot Guncannons, which were unsuited for close combat, despite already suffering heavy losses. During an attack by another group of Zeon stragglers, Bork piloted the Pixy against order and fought them off. Reluctantly, Gaddish allowed him to continue piloting the Pixy, but only after humiliating him by having him lick his boots.

In the end, the leader of Wolf Gar, Henry Boone, attempted a desperate strike on the Albatross base in his Efreet as Gaddish and the base staff were preparing to evacuate. Gaddish escaped in a Medea, abandoning Bork and the Pixy. Both of Bork's wingmen were killed in the tense face off with Henry Boone.

If the player loses they get a brief cutscene explaining that Boone went on to aid in the defense of Solomon and then disappear. If the player wins they get a cutscene wherein Bork Cry finds Saki Graham, a Zaku pilot under Boone's command who escaped her MS before it exploded. He helps her up and together the two limp through the desert back to the now deserted Albatross Base. The game ends with the words "To be continued..."

The statistical values in the game are managed by a two types of points, Ability Points and Prime Points.

Ability Points (AP) act as both a sort of fuel (one AP is consumed for every space moved) and Hit Points. While it is impossible for an MS to be destroyed by consuming all its AP, it can become immobile once all AP is consumed hence rendering it nigh useless. AP depleted by enemies causes the MS to be destroyed and the player to lose (in the case of either Gundam) or the MS to retreat for the duration of the mission (Guncannon or Guntank).

Prime Points are another key component of the game. The characters start with a certain amount of these points initially and gains them through leveling. These points can be assigned to either Aim Attack (ranged weapons), Skill Attack (available/equipped special weapons, also determines what melee special attacks can be used), Close Defense (melee defense), Aim Defense (ranged defense), Skill Attack (defense against enemy special attacks), Item (maximum amount of equipable consumable items), Move (maximum movement within a single game round) and in the case of the Gundams Close Attack (melee attack damage). Unlike typical attribute point assignment these values are not fixed and can be changed either at the equip prompt between missions or at the time a character levels up.

Once in battle, the gameplay system uses a grid system, though no grid is visible on the map. Players select a machine and upon doing so have access to a command menu. The commands are as follows:

Only one MS is allowed to act at a time and it's action is considered a turn cycling. This means that the same MS can be used repeatedly without penalty as no matter which MS is selected the turn is over after it has acted. This means that enemies functionally only attack player MS with only one MS at a time.

Attack actions have several types. Melee can be executed by moving and confirming a move when squarely facing an enemy MS. Alternately it can be executed by selecting "Close" from the attack menu, however this can only be done if the MS is already perfectly facing an opponent. As move does not allow any canceling once initiated this makes using actions without disengaging in melee impossible. Once a melee has been initiated pressing A to confirm will perform a melee attack which will be countered and so on until one MS is destroyed. Canceling out of a melee results in an immediate counterattack by the opponent which is in addition to any action they take on their turn. Special melee attacks are accessed by confirming a melee against an opponent and then executing a D-Pad rotation followed by an A confirm. If not input successfully these attacks miss automatically and a distinctive sound effect is played. Even when input correctly they can still miss. As melee specials are performed they accumulate a usage percentile which, once at 100%, allows them to be input from the Attack -> Close menu without the need for a D-Pad rotation. Additionally once at 100% none of the normal prerequisites (i.e. ranks placed in Skill Attack) need by met. Ranged attacks are executed entirely through the attack menu, with the exception of B-Gun attacks from the Guncannon which are executed by attempting to move to an opponent's square. B-Gun from Gundam requires melee range and facing, Guntank has none. A-Gun attacks almost universally hit an area of effect. Because of the game's system this rarely catches more than one opponent, however there is only one specific ranged special attack that truly only targets one square.

Missions usually consist of either one of two things. Eliminate (nearly) all opponents on a map or pursue and damage or defeat a boss and/or accomplish several objectives necessary for the Gundam storyline to play out. Mission objectives are unfortunately never explicitly stated, nor do they appear in a menu in game for quick reference. This makes for some difficult situations in some missions when an objective is unclear.

Bosses if fought outside of boss battles, such as in missions where they appear on the field and must be attacked, usually have a pattern of appearing in a field, then upon being attack by a Gundam they retreat to a different field. Pursuit becomes difficult as in some stages they will spawn normal enemies every time they move and the visual range of a player unit is extremely limited (usually no more than three squares away), this leads to some lengthy pursuits. Players are forced to pursue and attack them repeatedly until they make a final permanent retreat or are defeated. Generally this triggers an event, usually either a mission end or a boss battle.

Experience gained is retained even after losses. This is both advantageous and disadvantageous. The advantage is the obvious ability to re-enter a mission with greater strength, the more insidious disadvantage is that leveling completely restores an MS' ammo and allows the player to replenish all of the leveling character's consumable items. This means that characters of higher level, by receiving less experience from each action, have a lower potential to level in battle and thus be completely restored. 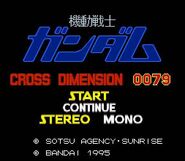 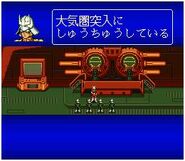 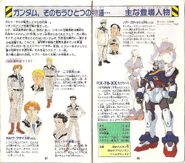 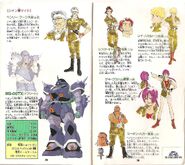