Mobile Suit Gundam: Char's Counterattack - Beyond the Time (機動戦士ガンダム 逆襲のシャア BEYOND THE TIME)

2
Mobile Suit Gundam: Char's Counterattack - Beyond the Time is a manga written by Arry and illustrated by Chimaki kuori in 2010. Published by Kadokawa Shoten in Gundam Ace magazine. The manga retells the events of Char's Counterattack from the perspective of Nanai Miguel.

The year is Universal Century 0093. The Red Comet Char Aznable reappears to force the emigration of the inhabitants of Earth into space, and the Federation responds by creating a special forces unit to deal with the rebels called Londo Bell.

As the final preparations are made to drop Axis onto Earth, Nanai Miguel dawns her normal suit and proceeds to the bridge of the Rewloola to wish her lover well before he launches. However a strange feeling begins to stir in her mind and awakens forgotten memories.

As Nanai observes the confused battle between Quess, Chan and Hathaway that ultimately leads to the needless deaths' of both Quess and Chan. The extra piece of Psycoframe that Chan kept with her survives the battle and begins radiating, and Nanai begins to perceive the events that are unfolding on the battle, but it appears the sensations are to much to bear and falls into her memories.

As Nanai slowly regains consciousness, she finds that she no longer on the bridge of the Rewloola, surrounded by people she doesn't know. However as she tries to escape she is incapacitated and placed into an isolation room. As time passes, still with no recollection of where she is, or how see got there, she is informed that she in a part of Augusta labs and she soon too; will become a Newtype cadet like the others' there.

Angela takes Nanai to a private room within the Augusta facility where they observe dolphins swimming in a tank and while there they begin to talk, but Nanai feels that Angela is holding back when she raises the subject of Angela mother, and afterwards goes to confront Loren about Angela where he confirms that Angela mother is a lifeline for Angela so her Newtype abilities can develop. However before Nanai can reveal to the truth to Angela, Loren has her returned to an isolation room, but during a simulated battle between the cadets' Angela experiences a mental breakdown and turns violent on her comrades.

As Angela continues her attack against her fellow comrades, Claire is forced to return as her unit is badly damaged. But as Nanai frantically runs to the Mobile Suit Hanger, she realizes that she is currently re-living her own memories as she sees Claire being removed from her cockpit. Unfazed by this Nanai launches in the damaged unit in an effort to reason with Angela, however before she gets a chance to properly talk with her Loren has her unit destroyed, as he has no use for objects he cant control.

As Nanai continues her journey through the memories of her past she now finds herself in the unfamiliar surroundings of Tibet a place she has never been to. Alongside people she has never meet, and a young girl named Quess. A girl who was attempting to expand her awareness of the world around her and unlock her latent Newtype potential, but it was not long after this encounter that Quess and the group would be apprehended by the police and she would be returned to her fathers care prior to his departure for space and the rest of the group would be transported to Lhasa for detainment.

BEYOND THE TIME Vol. 2 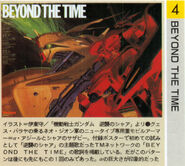 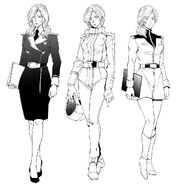