Making its theatrical debut on March 12, 1988, Char's Counterattack is the final culmination of the original saga begun in Mobile Suit Gundam and continued through Mobile Suit Zeta Gundam and Mobile Suit Gundam ZZ, marking the final conflict of the fourteen-year rivalry between Char Aznable and Amuro Ray, and the end of the EF/Zeon conflicts. The movie is based on the novel by Yoshiyuki Tomino.

In addition to being the first original Gundam theatrical release, Char's Counterattack was also the first Gundam production to make use of computer graphics during a five-second shot of a colony rotating serenely in space.

Char's Counterattack made its American debut on January 4, 2003 at 11 p.m. on Cartoon Network's Adult Swim.

In Tibet, a group of people are running away from Federation police. One of these people is Quess Paraya, daughter to Earth Federation Prime Minister Adenaur Paraya. Quess is taken back to her father, as they take a plane to head for a spaceport. Quess and her father then argue about the Federation enforcing its edicts onto Spacenoids.

In space, the asteroid Fifth Luna is being dropped onto Lhasa by Neo Zeon forces coordinated by Nanai Miguel, with the Londo Bell taskforce sent to intercept. Cyber Newtype Gyunei Guss, in the MSN-03 Jagd Doga, was guarding Fifth Luna against Amuro Ray in the RGZ-91 Re-GZ. However, they are intercepted by Char Aznable, piloting his custom MSN-04 Sazabi. While Amuro argues that dropping Fifth would cause a nuclear winter, Char believes that there will always be selfish people living on Earth who must be eradicated. Char and Gyunei eventually retreat.

At the spaceport, Adenaur's mistress leaves him after being harassed by Quess. Mirai Noa pleads with an officer to accept her ticket signed by the government, but Adenaur uses his political power to get Mirai's son Hathaway Noa onboard, while Mirai and Cheimin wait for the next shuttle.

Onboard the Ra Cailum, Amuro talks with Bright Noa on how Neo Zeon got the power to propel the asteroid. On Earth, the shuttle launches into space, as it barely avoids the descending Fifth Luna, which crashes into Lhasa, Tibet.

After the drop, Amuro heads for Von Braun to get the ν Gundam. There, Chan informs Amuro that she's a member on the Ra Cailum, while October talks to Amuro about the Psycoframe cockpit installed in the Gundam to shorten reaction-times. In space, Char gives a speech to his troops about the success of the previous drop. Neo Zeon pilots then execute a diversionary operation so that Char and other Neo Zeon officials can get to the space colony Londonion.

Meanwhile, Chan and Amuro head into battle with the incomplete ν Gundam after being called back by Bright. The shuttle arrives at the Ra Cailum, with Adenaur instructing Bright to take him to Londonion for important business. In his quarters, Amuro has a vision of Lalah Sune, who continues to plague both Amuro and Char. Aboard the ship, Quess and Hathaway talk about Amuro's exploits, such as him piloting the RX-78-2 Gundam during the One Year War, and also the subjects of Newtypes and parents. After viewing him on the MS deck, Quess is immediately smitten with Amuro, and wants to understand more about him. However, Chan shoos her off, and Quess believes that she is in her way.

Arriving at the colony, Adenaur and Federation officials including Cameron Bloom of the Audit Bureau are greeted by Char and Neo Zeon officials. Cameron is suspicions as there are suitcases full of gold at the meeting. The Federation signs a treaty that hands Neo Zeon Axis on the condition that their fleet disarms at Luna II. Neo Zeon claims transfer Axis to Sweetwater for their people to habitate. While Amuro is chasing a swan with Quess and Hathaway, he spots Char riding a horse and gives chase. Amuro and Char start arguing over their beliefs in humanity, when Quess overhears that the people on Earth are weighed down by gravity. She subsequently takes Amuros gun and leaves the colony with Char and Gyunei. Meanwhile, Cameron meets with Bright and explains the secret treaty that took place. Bright confronts Adenaur, who explains that the gold will be used to solve the Federation's welfare issues. In space, Quess pilots the RMS-116H Hobby Hizack and is a natural at piloting, especially after handling the Jagd Doga after 4 tries. After the test, Gyunei is harassed by ace pilot Rezin Schnyder, but Quess breaks them up. In Sweetwater, Nanai asks if Char though up the plan just to get even with Amuro. Char then reminisces about Lalah and her abilities. On Earth, Mirai and Chemimin prepare to evacuate their home. At Sweetwater, Char makes another speech about the history of Spacenoid's struggle for independence and how it was corrupted by the Zabis and Haman Karn. Char tells his troops that he plans to drop Axis onto Earth to make history. Char launches dummy ships towards Luna II and the Federation sees that the numbers include one extra ship. Bright talks to Cameron about the nuclear stockpile within Luna II which work. Cameron also tells Bright that life imprisonment is worth preventing a nuclear winter. A team of RGM-89 Jegan units launches to inspect the ships, but they are intercepted by the Rewloola. The Neo Zeon forces launch their attack on Luna II, and use a barrage of missiles. Quess goes ahead of the attack fleet and destroys a number of ships, one of which contains her father.

On board the Ra Cailum, Hathaway hides from Londo Bell as ace pilot Kayra Su and her lover Astonaige Medoz finish repairs to the Re-GZ. The ship comes across the destroyed Federation fleet, and a sole Jegan unit arrives and tells them of Neo Zeon's surprise attack. At Luna II, an angry Quess launches in her Jagd Doga to find Char, despite Gyunei's pleas. Meanwhile, Hathaway is discovered by Kayra and Amuro as the former leads the first wave of MS to intercept Axis. Londo Bell launches a barrage of missiles including nuclear warheads but Char intercepts them. Bright slaps Hathaway for sneaking on board, and Amuro realizes that he wants to see Quess. Despite Hathaway's determination to get her back, Amuro tells him that Char is taking advantage of Quess' sensitivity as a Newtype and enhancing them. Hathaway reveals that he's learned how to pilot a mble suit, but Amuro leaves and launches in νGundam along with the second MS wave. Char intercepts more missiles as Axis' thermonuclear thrusters activate, sending it towards Earth. Hathaway is placed in a room as he asks Chan about the T-shaped object on her waist. She explains that it's a psycoframe sample that she is testing for its capabilities. Gyunei then launches from the Rewloola to find Quess. Gyunei finds Quess but she breaks off from him to find Char as Gyunei intercepts the remaining nuclear missiles. Quess finds Char and leaps towards him without a normal suit as he takes her inside Sazabi and consoles her.

During the battle, Kayra's Re-GZ is captured by Gyunei and a couple of Geara Dogas. She tries to escape the damaged unit,but is grabbed by Gyunei's Jagd Doga, who uses her as bait. Amuro arrives at the scene and Gyunei demands Amuro hand over the Gundam in exchange for Kayra. Amuro detaches his funnels and two Geara Dogas start electrocuting him. The funnels quickly react and free Amuro, but Gyunei kills Kayra in the process. On board the ship, Chan mans the gun turrets, and gets help from the psycoframe sample in taking down Rezin, Amuro returns with Kayra's body, and he forms Chan that he was unable to control the overly-sensitive funnels. Meanwhile, Quess' Newtype abilities allow her to see everything that is going on around her.

On board Axis, Nanai explains to Char that Gyunei is desperate to keep Quess for himself. Char instructs Nanai to allow Quess to test pilot the Newtype mobile armor α Azieru. At the Alpha, Gyunei takes Quess to an abandoned section of Axis. Gyunei explains that Char's true love was Lalah, but is with Nanai for public appearances. Quess leaves Gyunei and vows to kick both Nanai and Lalah out of Char's life. Londo Bell devises a plan to destroy Axis before it hits Earth. It involves destroying the thermonuclear engines then landing ground troops in petite MS units to detonate Axis' central connection point. Chan reads a letter from October which reveals that the psycoframe wasn't developed by Anaheim's R&D division, and that the technology may have been provided by Neo Zeon. Amuro meets with Chan and they share a kiss, vowing that he'll win with the funnels. On Earth, Mirai and Cheimin see Axis passing befoe the Sun. While Hathway is on the main bridge, Londo Bell MS forces launch towards Axis as Federation units from Side 2 and Side 5 are arriving as back up.

Quess and Gyunei launch, and they immediately sense Amuro's presence. Quess launches her funnels but Amuro easily destroys them. Gyunei, Quess, and Amuro fight, with Amuro managing to damage Quess's Alpha. On the Ra Cailum, Hathaway sense Quess getting increasingly insane, and steals a Jegan to go and save her. Chan grabs the damaged Re-GZ and launches save Amuro, killing Astoniage while launching. Amuro manages to take out Gyunei, while Bright launches the last of the missiles that Char intercepts. Hathaway eventually finds Quess and begs her to stop. Chan arrives and Quess tries firing at her, only for the psycoframe to deflect the blast. The psycoframe sample has the Re-GZ fire granades to protect Hathaway, and they hit the Alpha, killing Quess. In a fit of rage, Hathaway fires on the defenseless Re-GZ, killing Chan. The Ra Cailum lands on Axis and infiltrates it while Amuro and Char duel. Amuro destroys a Musaka and takes out one of Axis' thrusters. Amuro and Char duel again as Char implores Amuro to remember the pain he felt when Lalah was killed. Amuro heads inside Axis as Bright and the other men leave, with Char following Amuro. Amuro and Char try to blast each other with bombs and rockets while Amuro believes that Char is trying to cause a foolish revolution. The two escape and continue their MS duel. The nuclear bombs inside Axis detonate, splitting the asteroid in two, while Amuro defeats Char and grabs his escape pod.

The explosion within Axis had too much power, resulting in the rear half of Axis decelerating towards Earth. Amuro rams Char's escape pod into Axis in an attempt to push it clear of Earth. Bright wants to use the Ra Cailum to push back Axis, but his officers stop him. Char reveals that his own victory would be nothing if he hadn't allowed Anaheim to give Londo Bell the psycoframe technology, at which point the psycoframes on both units begin to resonate and glow. Suddenly, the Earth Federation's 88th Fleet arrives to assist Amuro with a team of RGM-86R GM III. Eventually, Neo Zeo suits join in attempting to push back Axis, but they themselves begin to be destroyed by the heat of the atmosphere. Amuro's powerful brainwaves channel the resonance of the psycoframe to increase, pushing away all suits except for v Gundam. Amuro claims that he didn't want to be Quess' surrogate father, but Char reveals that Lalah was like a mother to him. At that point, Amuro and Char vanish within the psycoframe luminescence phenomenon and both halves of Axis are pushed back from Earth in an aurora-like display. 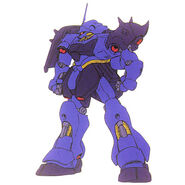 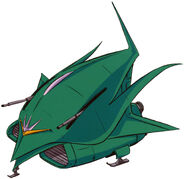 On June 1, 2016, Nozomi Entertainment announced that they would release the Blu-ray of Mobile Suit Gundam: Char's Counterattack along with that of Gundam Build Fighters Try in September 2016.[1][2] Along with Mobile Suit Gundam F91, the film received a 4K HD Remaster Blu-Ray release in June.

The movie was made available for online streaming in select regions as part of Gundam Online Expo from August 20, 2020. 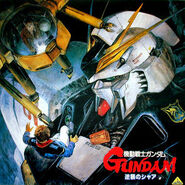 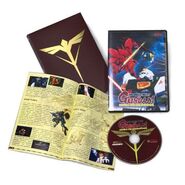