Universal Century 0081, two years after the Battle of A Baoa Qu. Although the world begin to resume order, small-scale battles continue to appear in multiple places by the Zeon remnants who continue to resist. An elite unit, known as the Phantom Sweep Corps, is assigned by the Earth Federation to hunt down Zeon remnants. They are led by Hugues Courand. However, a team of Zeon forces known as the Invisible Knights led by Erik Blanke, stand against them.

Additional mobile suits and maps were also available as downloadable content (DLC). These include units featured in Mobile Suit Gundam 0083: Stardust Memory and new missons for the game's Free Mission mode that can be obtained for free.

This game was very poorly received in Japan, due to a large number of plot holes, contradictions with the established canon, useless AI teammates, and serious balancing issues. 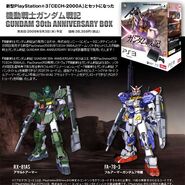