Mobile Suit Gundam: A Year of War is a 1993 turn-based strategy game for the PC-98 developed and published by Family Soft Co., Ltd.

Following the establishment of space colonies, tensions between their inhabitants and the Earth Federation gradually increased. The Republic of Zeon pushed for independence, but the Federation applied sanctions to the colony, fearing it would disrupt peace. After a change of leadership, Republic of Zeon became the Principality of Zeon, a despotic, militarized state with a visible intention to achieve independence by any means. Soon the conflict evolved into the deadliest event humanity has ever known - the One Year War.

A Year of War is a strategy game similar to Family Soft's earlier Return of Zion, though from the point of view of Gundam chronology, it is a distant prequel. The gameplay is nearly identical to that of its predecessor: the player navigates units (mostly mecha pilots) in turn-based fashion over the battle field, attacking enemies when they are in the range of the unit's weapons. Like in the previous game, the one-on-one battles are active, the player being able to choose between several kinds of weapons or retreat. In-battle dialogue and cutscenes advance the plot of the game. 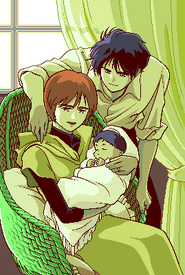 Character Data
Add a photo to this gallery

Retrieved from "https://gundam.fandom.com/wiki/Mobile_Suit_Gundam:_A_Year_of_War?oldid=417078"
Community content is available under CC-BY-SA unless otherwise noted.