The Gundam Wiki
Register
Don't have an account?
Sign In
Advertisement
in: Universal Century, Series, Project: Crossbone,
and 2 more

17 years have passed since the "Steel Seven" defeated the remnants of the Jupiter Empire. As a new conflict brews between a Side 2 faction known as the Zanscare Empire and the League Militaire/Earth Federation. A high schooler on Side 3, Font Baud, is hunted by Zanscare special forces when he discovers their secret Newtype weapon. However, he encounters a little girl, who is accompanied by a blind man and is rescued by the strange return of a mobile suit that defeated the Jovians.

Font Baud is waken by the sound of Haroro who promptly begins by chastising his lifestyle before he gets ready to leave for school and is meet along the way by one of his friends. During class Font is barely able to keep his eyes open, after he found some information on a new weapon that may be part of the Zanscare Empire's endgame.

After leaving class Font Baud notices a young girl looking through a window and when he approaches her to ask if she is looking for someone, she reply's that he is the one she is looking for and immediately runs off. As Font Baud and his friend give chase Haroro tells Font that his website has disappeared from the net and all the information has been deleted which makes him temporary depressed over his lost youth. Regaining his bearing Font Baud resumes his chase after the girl ultimately following her into the school gym, where she is seen standing alongside a man who introduces himself as Curtis Rothko a representative of Serpiente Tacon.

Curtis Rothko goes on to explain that it was his people, who has taken down his website and says that his actions will soon come under scrutiny from the eyes of the Zanscare Empire and offers him a two choices: accompany them or die. Suddenly the colony comes under attack from a Sandhoge. Before they get a chance to hide they are spotted and forced to run.

As the group run into an alley to try and escapes from the Sandhoge chasing after them, Haroro informs Font Baud that they are slowly surrounding them. Suddenly Font Baud is pinned down by a Sandhoge as the pilots exits the cockpit to question him about seeing the Angel which only confuses him. Curtis Rothko suggests he play along since they wouldn't believe him and that they are all going to die anyway. At the very least this will buy them some time for "something" to arrive to help.

Suddenly fog descends upon the city and using this distraction Font Baud escapes to help Curtis Rothko and Belle except Curtis Rothko is nowhere to be found, all of a sudden a strange MS figure appears amongst the fog. The Sandhoge assume it must be an enemy as they have no other allies in the colony and open fire on it, however all of their beam attacks are deflected but as some of the fog clears Font recognizes the MS as the a Crossbone Gundam type. As the Ghost makes quick work of the Sandhoges Font Baud remarks that a unit of its age should have already lost, when it is suddenly revealed that Curtis Rothko is its pilot.

Font Baud and the others are forced to leave the city and take refuge in Zum Special War museum as more Sandhoge arrive. While they are trapped Curtis Rothko asks if Font Baud still has a copy of the data Font Baud found on the net on his pad, Curtis Rothko goes on to explain that the data is part of the Zanscare Empire's invasion plan for earth and that one of their allies risked his life to obtain it, but surmises that he knew he was being closed in on by Zanscare agents and that’s probably why it was leaked online and how Font Baud was able to obtain it.

Curtis Rothko also goes on to explain how they could not crack the encryption on the information but Font Baud did it easily and they may need him. Curtis Rothko offers Font Baud a deal that in exchange for his help they will offer protection to him and his family. Font Baud reluctantly agrees as he realizes that he really has no other choice and they begin looking for MS to make their escape in as they all wont fit in the Ghost since it's a single seater. After a bit of searching Belle wonders if the Gelgoog will work but Font Baud tells her that it isn't moveable due to it being display only. Font Baud than remembers about there there is a Zaku II that is brought out and used for events so he suggests that they find that since surely it is moveable.

While they are looking Font Baud asks how Curtis Rothko has a Crossbone Gundam in his possession much to Curtis Rothkos' surprise who expected another question. Curtis Rothko goes on to explain that a supply ship twenty years ago was involved in an accident and that the Ghost was left drifting in space as it was simply not known about. He also goes on to say because he went looking for it something unexpected was also found, but stops short of explaining what it was. Belle shouts to the guys if this Zaku II do which Font Baud confirms after getting up close to it and notices that everything is in place. Font Baud and Belle than realize that reinforcements have arrived outside from the Zanscare Empire under the guise of stopping the "supposed" malfunctioning Sandhoge.

Curtis Rothko tells Font Baud to get ready and he'll head out in the Ghost. Font Baud exits the basement first and proceeds to bash a Sandhoge with his dummy machine gun as Curtis Rothko takes to the air to deal with some of the Zoloat reinforcements that have arrived. As Font Baud looks on in amazement at how Curtis Rothko is not only able to hold his own against but also manage to disable the radically newer and more advanced units, he fails to notice several Sandhoge approach him and Belle and is only saved at the last second by Curtis Rothko.

But just as they think they will be able to escape, a new unit appears in front of them.

Chapter 03 "The Messenger from Thoucus"

Curtis Rothko goes on to explain that he judges everything by sound and the sensors on the Ghost have been designed to give an audio feedback to the pilot with a different sound for each type of MS. But if the unit has not been encountered before or the computer doesn't recognize it, it will only respond to a standard alert.

Font Baud describes the suit as having a weird hat, possessing a pair of three spinning claws, Curtis Rothko remembers some development plans describing a specialized Close Quarters Combat for Thoucus. Additional Zanscare forces arrive on the scene and open fire on the Zaku II and the Ghost, only to be instantly sliced apart by the Desphys. A Zoloat pilot demands an explanation from the Desphys pilot as to why he would attack his allies. He snidely responds that although their targets are the same it does not mean they are on the same side and begins to attack Zanscare reinforcements.

Curtis Rothko suggests that while the Desphys is busy dealing with the Zanscare forces that they make their escape as they don't stand a chance against specialized unit designed to fight potential a hundred possibly even a thousand units at once. However, they don't get far before the Desphys catches up with Font Baud and Belle in the Zaku II and launches an attack only to narrowly miss.

Font reemerges form the museum carrying a Gelgoog and throws it directly at the Desphys, it's pilot proclaims that he wont miss a third time, but as Haroro accurately predicted he once again misses as the Desphyss' computer miscalculates the distance between the Gelgoog and the Desphys. Using this as a distraction Curtis Rothko takes flight.

On the ground a group of onlookers have gathered around the battle site, when suddenly the Desphys Beam rotor emerges from the rubble and appears relatively undamaged apart from some denting to its head. The Desphys pilot observes a family of birds in a nest and remarks that he is quite fond of his new opponents, as he helps balance their nest, before immediately taking off after Curtis Rothko and Font Baud.

Curtis Rothko again alludes that the Desphys truly is a unit designed to combat a thousand units at once. As the MS approach the operator orders the immediate opening of the space gate as he realizes that they are not going to be trapped and they are ready to blast their way out. Once outside Font Baud is awestruck by the mothership which resembles a gigantic flower. The Desphys arrives just as Curtis Rothko, Font Baud and Belle board the Manzana Flor and witnesses the rapid acceleration as it departs from the colony and believes that the people who operate that ship have a Minovsky Drive. Jack Friday, the pilot of the Desphys, then receives a message from his boss, saying that they might have a potential employer. Friday's boss then reveals that the price of Angel Call is skyrocketing even higher.

Back aboard the Manzana Flor, Font Baud is put through questioning and a physical exam before retiring to his temporary quarters. After a brief conversation with Belle, Curtis leads Font and Belle to the bridge of the ship where the ship receives a broadcast from Tetenith Dogatie. Tetenith details that although they have a clue to follow for the location of Angel Call, the Jupiter Foundation, which Tetenith leads, must now act outside of the authorization of the Jupiter Congress and she then rechristens Serpiente Tacon as the Crossbone Vangaurd. After this speech, Curtis asks Font to start immediately on trying to find more info on Angel Call, Font says he will start, but asks what Angel Call is. Curtis then reveals that Angel Call is a space microbe that is also a strong pathogen that causes a deadly desease.

Chapter 05 "A Remembered Experience or Did Something Happen in Outer Space?"

Chapter 06 "Is the Butterfly Flying?"

Chapter 07 "Gathering on the Moon"

Chapter 10 "The Shrike's die is cast"

Chapter 20 "The Beasts in the Jungle"

Chapter 21 "The Mermaid with Legs"

Chapter 23 "Gathered in front of-"

Chapter 31 "A desperate struggle with fire ..."

Chapter 34 "Birds of the mirage" 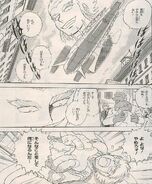 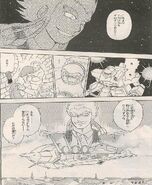 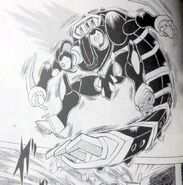 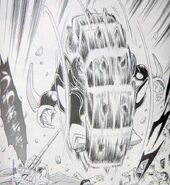 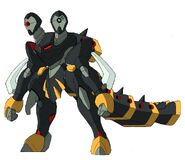 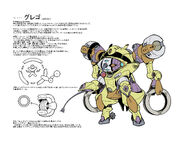 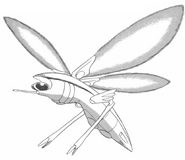 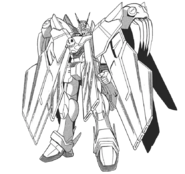 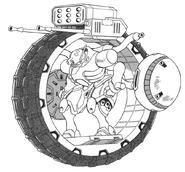 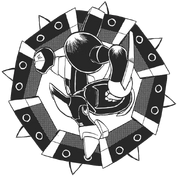 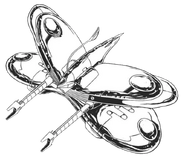 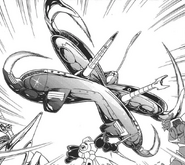