Messiah (宇宙機動要塞メサイア) is a mobile space fortress in the series Gundam SEED Destiny.

As its name suggests, the Messiah base is heavily armed and defended. Its most powerful weapon is Neo-GENESIS, a smaller variant of the massive GENESIS superweapon used in the First Alliance-PLANT War. Although smaller, the weapon is still capable of destroying a fleet in a single shot. For point defense, the fortress is armed with quad laser-cannon turrets. Besides these turrets, the station is also equipped with a powerful beam shield, capable of engulfing and thus protecting the whole station from weapons fire. The shield can however be taken down by Mobile Weapons. Lastly, the fortress is protected by a large army of ZAFT warships and mobile suits.

In addition to its weapons, the fortress is also equipped with a massive computer room, responsible for analyzing and managing human genetic information, making the Messiah an essential part of the Destiny Plan.

Messiah started out as a mining asteroid, which, after having been stripped of all valuable resources, was hollowed out and turned into a fortress, sometime after the first war. Thanks to its large engines, the fortress is capable of independent movement.

Near the end of the Second Alliance-PLANT War, PLANT Supreme Council Chairman Gilbert Durandal headed to this base after he left Earth and from there commanded the attacks on the Earth Alliance's Daedalus lunar base and the Requiem superweapon. Afterwards, the fortress headed to the moon where it engaged the forces of the Three Ships Alliance. Using its Neo-GENESIS weapon, Messiah is able to destroy several ships which had defected from the EA. While the superweapon began to charge, a large space battle broke out around it. Neo-GENESIS is then fired again, it not only destroyed several enemy ships but also some ZAFT ships. Kira Yamato, who was in his ZGMF-X20A Strike Freedom Gundam docked with his assigned METEOR unit, and proceed along with Eternal, to inflict heavy damage on the fortress. He then entered the base and confronted Durandal, who is eventually shot by Rey Za Burrel. Both Rey and Minerva captain Talia Gladys decided to stay on the fortress, while the station descended onto the surface of the moon, before crashing onto the lunar surface. This event thus marked the end of the war. 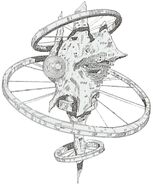 Rear of the fortress

Crashing into the moon
Add a photo to this gallery

Retrieved from "https://gundam.fandom.com/wiki/Mobile_Space_Fortress_Messiah?oldid=451441"
Community content is available under CC-BY-SA unless otherwise noted.