In F.C. 60, the 13th Gundam Fight begins. Domon Kasshu pilots the Shining Gundam as the representative of Neo Japan, the Japanese space colony. Along with his crew member Rain Mikamura, he battles the other countries' representatives in order to earn the right to rule Earth and the colonies for four years for Neo Japan. However, Domon seems to be more concerned with finding his brother and the stolen Devil Gundam.

Round 1: Gundam Fight! Ready... Go!!
Round 2: Vs. Gundam Maxter
Round 3: Vs. Dragon Gundam & Bolt Gundam
Round 4: Vs. Bolt Gundam & Gundam Rose
Round 5: Shuffle Alliance VS Master Gundam Coalition

Round 6: Fierce Battle in the Guyana Highlands
Round 7: A new Raidance
Round 8: Allenby - The Bishoujo Fighter
Round 9: Deadly Tag Team Match

Round 10: Vs. Gundam Spiegel
Round 11: Deadly battle Royale!
Round 12: The east is burning red!
Final Round: Vs. Battle against the Devil Gundam, Gundam Fighters Forever 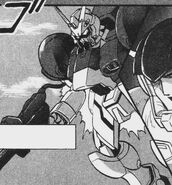