The Gundam Wiki
Register
Don't have an account?
Sign In
Advertisement
in: Cleanup, Stubs, Future Century,
and 2 more

Domon Kasshu and Rain Mikamura visit Neo Dodo, a picturesque island where a resort hotel run by Mocchi Ohgane and the surrounding town have been attacked by a mysterious Gundam. Domon agrees to look into the matter, only to be overwhelmed by a surprise attack from a skilled boxer, who has an "invisible uppercut" that he isn't able to see. This boxer is revealed to be a talking kangaroo, the Gundam Fighter of Neo Australia who kidnaps Rain before returning in the Jumping Gundam to challenge Domon.

Domon overcomes the "invisible uppercut", realising it's coming from a joey in the kangaroo's pouch, but as he threatens the joey while demanding Rain's wherabouts, Rain reappears alongside a number of animals. She reveals that Kangie, the kangaroo, was only out to avenge Dr Jonathan, and Mocchi Ohgane, in his President Gundam, attacks both Domon and Kangie before confessing to Dr Jonathan's murder, due to the doctor's refusal to become his underling and go along with his moneymaking schemes. Ohgane explains that he wants to take advantage of his position as a Gundam Fighter to rule the world with the power of money, before attempting to kill Domon and Kangie with the Mega President Buster, but Domon defeats him easily with his Shining Finger attack, before calling him out under Article 6 of the Gundam Fight International Regulations and destroying the head of the President Gundam.

Afterwards, Domon discovers that Rain looks like Dr Jonathan's daughter, which is why the animals took such a liking to her, and Kangie took her to safety before attacking the city with the J Gundam. After some reflection upon these events, Domon resolves to leave as the island belongs to the animals, but Rain insists they stay and rest for a few days, and she relaxes while Domon trains at boxing with Kangie. 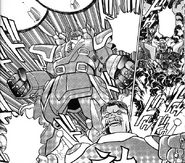 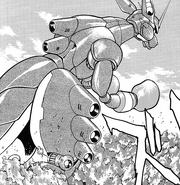 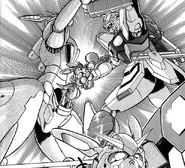 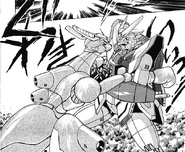