Masaki Shido's sister. She takes care of her younger brother, who was hospitalized when he failed to return to consciousness after playing GBN.[1]

Masaki is her younger brother. Prior to Masaki's coma, it is revealed that the two of them got along very well with each other.

A friend who attends her previous archery club and is set on breaking her records. 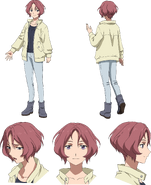