Miyu Takizawa (ミユ・タキザワ) is a character from Mobile Suit Gundam Side Story: Space, To the End of a Flash and Gundam Legacy.

She was the operator of the Thoroughbred. In the Gundam Legacy manga, she was promoted to second lieutenant and transferred to the Federation's Augusta Base shortly after the war's end. She joins Ford Romfellow and Noel Anderson as an instructor after rising to the rank of lieutenant. 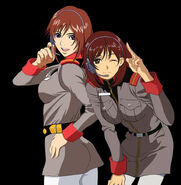 Miyu Takizawa in Gundam Side Story 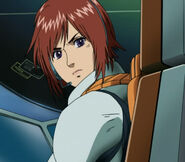 Miyu Takizawa in a normal suit.

As seen in SD Gundam G Generation Genesis
Retrieved from "https://gundam.fandom.com/wiki/Miyu_Takizawa?oldid=454249"
Community content is available under CC-BY-SA unless otherwise noted.