Miriallia Haw (ミリアリア・ハウ, Miriallia Haw?) is a fictional character in the Cosmic Era timeline, seen in the Mobile Suit Gundam SEED series. She serves as the Archangel's CIC during both Alliance-PLANT Wars.

Miriallia is shown living peacefully on the neutral Orb space colony of Heliopolis. With her boyfriend Tolle Koenig and friends Kira Yamato, Sai Argyle and Kuzzey Buskirk, she is enrolled on a robotics engineering course at the local college. This ends when the colony is raided by ZAFT in search of prototype Earth Alliance mobile suits which had been secretly produced in the colony.

The fighting ultimately destroys the colony; Miriallia and her friends end up as refugees on the Earth Alliance battleship Archangel. When Kira is unofficially drafted to pilot the remaining GAT-X105 Strike Gundam, Miriallia suggests they should also help out. Miriallia is assigned to monitor and communicate with Archangel's mobile suit and mobile armor complement, mainly relaying messages between Kira and Lieutenant Mu La Flaga to the ship's captain Murrue Ramius and executive officer Natarle Badgiruel.

His friends decision to continue in these positions despite being later offered a discharge convinces Kira to continue as pilot of the Strike. Miriallia and Sai help Kira when he returns the captured Lacus Clyne to ZAFT and along with Tolle are understanding when they learn ZAFT's GAT-X303 Aegis Gundam pilot Athrun Zala is a childhood friend of Kira's.

After being diverted from their original atmospheric re-entry point, the Archangel visits the Orb Union for repairs. Captain Murrue Ramius arranges a meeting between her young charges and their parents. Upon leaving Orb to continue on to the main Alliance headquarters, the Archangel comes under attack again. In the ensuing skirmishes, ZAFT pilot Nicol Amalfi is killed by Kira, Kira is reported MIA, Tolle is killed by Athrun, and ZAFT pilot Dearka Elsman is taken prisoner and his GAT-X103 Buster Gundam recaptured.

Miriallia is upset at the loss of her boyfriend and snaps when Dearka unknowingly insults Tolle, leading to her attempting to stab Dearka with a knife. Sai intervenes before she can fatally injure him, but Flay Allster tries to shoot him in the chaos out of racial hatred. Miriallia comes to her senses, saving Dearka's life. The manga expands this by showing Miriallia remembering discussing Kira being a Coordinator, with Tolle. Tolle remarked that it was hard to believe that Kira was a stereotypical Coordinator (dangerous and aggressive) and he and Miriallia both agreed to defend Kira no matter what. Knowing that Dearka is no different, she stops Flay while vehemently denying Flay's claims that they are the same. This is the start of a better relationship between Miriallia and Dearka, especially when Dearka confirms he didn't kill Tolle.

Later, the Alliance leaders attempt to wipe out a majority of ZAFT's forces by sacrificing their less desirable forces, including the Archangel and it's crew who are held with contempt for their association with Kira. He returns just in time to save them, using in the stolen ZGMF-X10A Freedom Gundam.

Miriallia and the rest of the crew defect to Orb, where Captain Murrue Ramius allows anyone unhappy with the defection to seek sanctuary. When Kuzzey leaves the ship, Miriallia is promoted to his former position as communications operator. She continues in this position until the war's end.

Dearka is released but told by Miriallia that the Buster will stay in their possession. Motivated by her determination and at odds with how xenophobic ZAFT has become under Patrick Zala, Dearka defects from ZAFT and joins the Archangel crew to use Buster in defense of Miriallia and her fellow Naturals, Orb and its ideals. He is soon joined by Athrun, with his new ZGMF-X09A Justice Gundam.

After learning who is really responsible for Tolle's death, Mirallia runs off crying. When Dearka tries to talk to her, she angrily states the obvious: killing Athrun won't bring Tolle back. Athrun overhears this and is impacted by Miriallia's words, expressing similar views later.

As the war enters its final stages, Miriallia warms to Dearka. Although she still mourns Tolle, she accepts her new ally and tells him to be careful going into battle.

In the After-Phase OVA, Miriallia is seen alone, silently mourning an old photo of herself and Tolle from before the series.

Two years after the first war, Miriallia is shown working as a freelance photographer, covering events such as the damage caused by Junius 7 and Meer Campbell's promotional appearance on Earth. However, subsequent cameos reveal that her new career doubles as a front for her actions as an agent of Terminal, the information group allied with many former members of the Three Ships Alliance. By chance, she meets Athrun again and learns of his rejoining ZAFT. Athrun asks about her relationship with Dearka Elsman. She does not reply, but later tells others she had dumped Dearka.

Miriallia arranges a meeting between Athrun and their mutual friends Cagalli Yula Athha and Kira. At this meeting, Athrun tells the others that Cagalli needs to return to Orb, while they inform him that special forces from ZAFT had attempted to assassinate Lacus. Before the Archangel's intervention in the Battle of Crete, Miriallia returns to the Archangel (much to the delight of the crew), taking up her former position as a communications officer. She continues to photographically log key events of the war for the sake of history. When Athrun confronts Shinn Asuka towards the end of this conflict, he reiterates the context of what Miriallia had said during the previous war about the senselessness of revenge for the loss of loved ones: it won't bring them back.

Miriallia was in a relationship with Tolle. She was heart-broken when he was killed.

He and Miriallia had an acquainted relationship after Tolle died in the war where Miriallia thought that Dearka was the one who killed her boyfriend. In the beginning, they had a nasty relationship when Dearka teased Miriallia (who was crying because of the death of Tolle) that crybabies like her shouldn't be on board a battleship if the only thing she could do was cry (a point that Dearka mentions that "Maybe you get a weakling boyfriend that died in this war" by chance) causing her to develop a hatred to him and try to stab him. As Flay also tries to kill Dearka for reasons that all Coordinators are the same, she then intervenes responding that they (Flay and Miriallia) are not the same even though both of them lost their loved ones at the hands of Coordinators. They then start a friendly relationship when Dearka said that he wasn't the one who killed her boyfriend. In the beginning on Gundam SEED Destiny, it is said that both of them are dating each other but it turn outs she dumped him.

Miriallia as the CIC (SEED)

Miriallia as the CIC (GSD)

Miriallia as a free-lance photographer 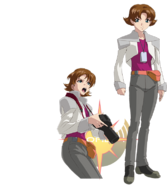 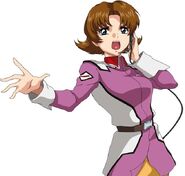