Mina overall is an intelligent and sexually aggressive woman. She doesn't hide her attraction to Billy Katagiri at all and intentionally uses her beauty and womanly charms to gain his attention. It's because of her forwardness that created a lot of unprofessional sexual tension during their work. While there are similarities to her genetic pseudo clone, Nena Trinity, due to the differences in how they were brought up, she has none of Nena's psychotic, murderous traits.

Mina is a research astrophysicist. While her complete duties aren't understood, it's suggestive she's contributing invaluable research to develop new GN technology and understanding the mysteries of the universe. She was also quick to realize the relations between the attacks held by the ELS and Innovators.

At a Union Territory Research Facility, Mina was called in by a group of ESF scientists who were analyzing a piece of debris from the previously destroyed exploration ship Europa. A scientist asked Mina why she thought the fragments of Europa hadn't burned up in the atmosphere, but she was cut off by Billy. He theorized that they underestimated Europa's mass and that it was heavier than they had previously thought. Excitedly, Mina jumped on top of Billy, thinking that he arrived to see her. A scientist explained that they had found less than half of the fragments that fell to Earth. Billy theorizes that either the fragments vanished, or that they were moving under their own power. Though the other scientists dismissed the idea, Mina showed them the locations of all the random attacks. Billy noted the correlation of the attacks with the location of the debris, and Mina had a theory, but she asked Billy to get some secret data from the Federation government which contained a database of people with high quantum brainwave activity and had the potential to become Innovators.

While performing more analysis on the mysterious debris, Mina and Billy were visited by Vice Admiral Kim and ESF Representative Klaus Grad. Mina had brought them in to observe a girl named Amia Lee, whose body had been turned to half metal by an organism known as a Extraterrestrial Living-metal Shape-shifter, or ELS. Mina explained that the ELS are presumably attracted to people emitting quantum brainwaves, otherwise those people that have the potential to become Innovators. Billy proposed to Klaus that the government should isolate people with quantum brainwaves in a shelter, and he agreed. Mina confirmed that the Europa was infected by the ELS and sent to Earth. Billy realized that they, as humans, had just come into contact with an unknown life form and that the ELS could speed up their reproduction rate.

Billy Katagiri
Mina seems to be infatuated with Billy and has been trying to flirt with him ever since she layed eyes on him. Ultimately, she won her prize as she and Billy got married and had a child together. 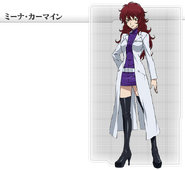