Mike Howard (マイク·ハワード, Mike Howard?) better known as Howard (ハワード, Hawādo?) is one of the original engineers who designed the Tallgeese, along with the men who would become the Gundam engineers. Unlike them, however, he chose to live a relatively calm life, operating a salvage boat on Earth as part of the Sweeper Group. His Hawaiian shirts and wraparound shades make him the most colorfully dressed character in the series.

Despite his genius, Howard is very laid back and easygoing. Lacking the sociopathic tendencies of his fellow Gundam scientists, he is a man who believes in doing the right thing without sacrificing others. His relaxed demeanour is reflected in his casual attire, wearing a Hawain shirt and sandals even while commanding spacecraft.

Like the Gundam Scientists, Howard is a gifted engineer. In particular, he is an expert in vernier technology, as evidenced by his modifications to the Heavyarms Gundam and the Sandrock Gundam.

Howard was one of the six scientists working on the first mobile suit the Tallgeese, but left when the United Earth Sphere Alliance began to oppress the colonies. While still with OZ, he met a young Treize Khushrenada during Tallgeese's construction. However, Howard did not go to the colonies to build the Gundams, but instead stayed on Earth to establish a business on the sea shore as a member of the Sweeper Group, a group of salvagers.

During Operation Meteor, he assisted Gundam pilot Duo Maxwell, providing him with supplies and repair for his Gundam Deathscythe.

When OZ began a coup d'état against the UESA, Howard helped out a defected Zechs Merquise and helped him and the repaired Tallgeese (Tallgeese Flugel in The Glory of Losers) into space. He also retrieved Peacemillion, which he used as Zechs' refueling station. He later ran Peacemillion as the Gundam's base during their battle with White Fang, and he would repair all the Gundams and upgrade the Heavyarms into the Heavyarms Kai, and the Sandrock into the Sandrock Kai.

Howard survived the Eve Wars and stays at the former Lunar Base as custodian of the Gundams. 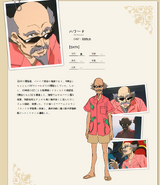 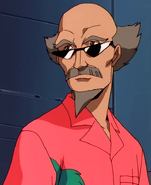 Retrieved from "https://gundam.fandom.com/wiki/Mike_Howard?oldid=452438"
Community content is available under CC-BY-SA unless otherwise noted.