Miharu Ratokie is a citizen living in Belfast, Ireland. After her parents died due to the fighting of the One Year War, Miharu began to work for the Principality of Zeon as a spy in order to support her younger brother and sister.

While spying on the White Base as it sat in the port, she met Kai Shiden and befriended him. When Kai decides to leave White Base, Miharu encounters him outside the base and invites him to her home where he meets her little brother and sister. Kai eats dinner with them and realizes that she is acting as a spy in order to support them. While there, he lets out information about White Base to her. Kai agreed to sneak her onto the White Base and took her to the Earth Federation headquarters in Jaburo, located along the Amazon River in South America. During the White Base's travel over the Atlantic Ocean, she began to develop feelings towards Kai and decided to join him in defense of the White Base with a Gunperry Transport Plane transport plane. When the Gunperry got damaged, Miharu was forced to help by firing the plane's missiles manually, but was knocked from the Gunperry by the missiles' exhaust blast, and fell to her death in the Atlantic Ocean.

Kai was devastated by Minaru’s loss and realized he needed to start caring more for his friends and stop being a selfish coward which he did. Ultimately despite, or because of her tragic death, Miharu played an important role in making Kai into a better person.

Like in the anime, Miharu, known by the ID 107, sends a blurred photo to Char of the White Base before posing as a local vendor to sell goods to the White Base's crew. By coincidence, she encounters Kai Shiden after he leaves the White Base and offers him a place to stay.[1]

Much to Miharu's annoyance, Kai initially doesn't divulge any notable information regarding the ship; only stating that it was meant to be an assault ship, and that the Federation was building far more like it. When a skirmish breaks out nearby, Miharu is called by a Zeon officer, and he passes her both money and a Federation uniform with instructions to infiltrate the White Base.

Upon returning home, she learns that Kai had left to rejoin the White Base, and she passes the money given to her siblings before giving them a tearful hug as she departs without knowing when she may return. Thanks to the chaos, Miharu sneaks into the White Base whilst disguised as a soldier.[1]

During the battle, Miharu eventually finds Bright Noa's room and searches it for possible information. Unfortunately, Kai unexpectedly arrives and is alerted to Miharu's presence when her pants has a tear. She is covered up for by Kai and is asked to get off at their next stop in Gibraltar.

During their journey, the ship encounters a Zeon ship posing as a fishing vessel to make contact with Miharu. The officer then instructs Miharu to search out the white mobile suit within the ship. As soon as the officer leaves, the White Base finds itself under attack, with a fire spreading near Kai's room. To her shock, children are on the corridor and are helping the soldiers fight the blaze. Feeling guilty and being reminded of her siblings, Miharu confesses to Kai that she is a spy and wishes to sortie with him to help fight against the Zeon attack. [1]

Unlike in the anime, Kai fakes a tantrum to kick out his gunner in order to allow Miharu to secretly board the Gunperry to fight the enemy forces. He also initially refuses to allow Miharu, as a non-combatant, to fire the Gunperry's missiles, only caving in when a Hygogg strikes their plane and damages it, forcing its missiles to be manually fired from the lower deck. Miharu volunteers to go down and fire, but as the missile flies, she is blown by the force and slams into a wall, and it is not indicated if this actually kills her before her body flies off of the Gunperry.

While in his depressed state, Kai encounters Miharu's spirit, and she attempts to console him with an end to the war. Miharu admits that she did not want to die; wishing to spend more time with Kai along with her siblings. As Kai regrets taking her with him, she urges him not to think deeply over the things they can no longer change. She soon bids her farewell to Kai, noting that "a new ship had arrived at the port", and that she would be off to sell her goods once more. [1]

In the Mobile Suit Gundam: The Origin manga

In the Mobile Suit Gundam: The Origin manga 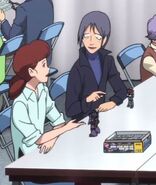