Miguel Aiman (ミゲル・アイマン) is a ZAFT pilot and member of the Le Creuset Team. He is also known as the "Magic Bullet of Dusk".

Miguel is a head-strong and somewhat arrogant individual, with a disposition is hardly that of a soldier. He normally underestimates his Natural opponents, however, putting his life on the line to pay for his brother's medical bills also shows a mature, caring side.

This feisty warrior goes by the "Magic Bullet Of Dusk" on the battlefield due to his custom GINN, which is the same color as the dusk-orange sky and great skill with a MMI-M8A3 76mm heavy assault machine gun. He is one of ZAFT green uniform ace pilots before the Heliopolis Tragedy. On one occasion, Miguel showed his formidable skill by fighting on par with Serpent Tail ace pilot Gai Murakumo.

Miguel participates in the transferring of the asteroid base Nova to the PLANTs, albeit he agrees reluctantly to this normally "boring" task, however, he engages Mu La Flaga during an Earth Forces attack. In January C.E. 71, the Nazca-class Vesalius under the command of Rau Le Creuset is sent out to investigate the mysterious destruction of ZAFT supply bases. While on patrol, Miguel discovers the culprit behind the attacks: Serpent Tail mercenary Gai Murakumo. Miguel's GINN is damaged in combat with Gai's custom GINN, forcing him to switch over to a standard ZGMF-1017 GINN for the attack on Heliopolis on January 25.

After the graduation of the Le Creuset Team's Reds, Miguel met all 5 of them at a military base in the PLANT Homeland. Miguel speaks to Athrun and Nicol (and very casually at that) who have arrived early and introduces himself, even though he's a bit annoyed that the other three pilots didn't come; he thought it a pain to have to re-explain everything over again. It his here that he learns that Athrun was top in the knife-fighting class, followed by Yzak and Nicol. Miguel is so impressed that Athrun beat the knife-fighting class teacher "Fred of the Knife", who only fights the best-of-the-best, on a one-on-one match and challenges Athrun himself and loses with a knife to his throat. He also explains to Athrun and Nicol to not ask their new commander about his mask because the last person that asked just happened to die, rather suspiciously, in battle soon afterwards. Nicol and Athrun look up to their new mentor in a new light after he tells them he has had real battle experience.

During the attack on Heliopolis, Miguel tries to capture the GAT-X105 Strike Gundam after hearing from Athrun Zala that Rusty Mackenzie - the ZAFT pilot who was supposed to capture it - has been killed, and that the Strike Gundam is being piloted by an Earth Alliance soldier (Murrue Ramius). However, Athrun fails to mention that Kira Yamato, his childhood friend, is also in the cockpit, and that Kira is a Coordinator. Miguel tells Athrun to retreat and protect the GAT-X303 Aegis Gundam from being damaged and then tries to take on the Strike himself. Seeing that his friends Sai Argyle, Kuzzey Buskirk, Miriallia Haw, and Tolle Koenig are in the vicinity of this battle, Kira takes control of Strike and fights back, ultimately forcing Miguel to retreat after disabling his GINN. Miguel quickly set the GINN's self-destruct sequence and escaped the GINN before it exploded.

Miguel, believing that the pilot of the Strike was a Natural, feels humiliated for losing and over-zealously returns to fight the Strike to restore his pride. Miguel is ultimately killed while still in Heliopolis when Kira slices into Miguel's GINN's cockpit with the GAT-X105+AQM/E-X02 Sword Strike Gundam's "Schwert Gewehr" 15.78m Anti-ship Sword; Miguel is the first person killed in action by Kira. 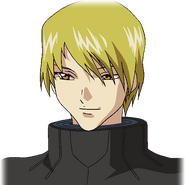 Miguel & his GINN moments before its destruction in the HD Remastered version.

Miguel being surprised to Strike's Phase Shift Armor, as seen in the Special Edition movies.

From Opening 1 of HD Remaster 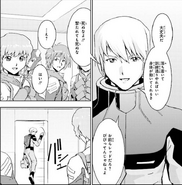 Miguel on the bridge of the Vesalius prior to Heliopolis (Gundam SEED Re:) 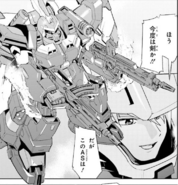 Miguel in his GINN Assault Type as seen in Gundam SEED Re: