Midnight Fenrir Corp (闇夜のフェンリル隊 Yamiyo no Fenriru tai) is a covert-ops special forces unit of the Principality of Zeon that was featured in the Mobile Suit Gundam: Zeonic Front video game. Consisting of a Mobile Suit Company and supporting units the Midnight Fenrir had multiple successful operations against the Federation before the end of the One Year War. Almost all of their known exploits occurred on Earth.

The Midnight Fenrir MS team was officially formed on January 31, U.C. 0079 by Kycilia Zabi and was operational throughout the entire One Year War. This team participated in the capture of the California Base during the 2nd Earth Invasion Plan. Lt. Gerhart Schmitzer was a mobile suit veteran during the first stage of the One Year War, the One Week Battle back in January. At the end of the One Week Battle, Lt. Schmitzer was badly wounded, and forced into retirement. This was due to Operation British, the operation that would force a space colony, into the Earth's orbit for a collision course to South America, where the Earth Federation's top forces were, Jaburo base. The injuries were extensive, but hope was on the horizon. Lt. Schmitzer approached Kycilia Zabi during the Antarctic Treaty cease-fire, He proposed the formation of a small Earth-bound covert-operations unit. Kycilia Zabi immediately approved, and formed an elite mobile suit unit onto the front lines, to be named the Midnight Fenrir Corps. Since Lt. Schmitzer was fluent in battle experience, he was promoted to Lieutenant Commander and made Commander/Mission director of the Fenrir Corps.

The Midnight Fenrir Corp participate in early raids on Federation territories in North America and joins many historical battles such as the Battle of Seattle, where Garma Zabi is killed in action and the Invasion of Jaburo, with Federation pilot Lt. Agar confronting them. Eventually the Federation manages to develop and field Mobile Suits in combat which tips the balance of power in their favor. Eventually, even Midnight Fenrir's skills are not enough to save the war effort: Zeon eventually evacuates their forces on Earth to fight in space. The Midnight Fenrir team decide to leave last and cover the retreating forces. However, when the last operational H.L.V. is lost, they eventually join up with remnant Zeon forces in Australia. Their last battle was in Australian deserts trying to save a stranded allied unit from Federation assault. It is confirmed that they survived the war.

The Midnight were one of the many examples of Kycilia Zabi's efforts to decentralize the war effort in an attempt to attack the diminish Federation combat power on Earth. For the most part the Midnight Fenrir met everyone of their objectives and were very successful in keeping combat losses to a minimum. 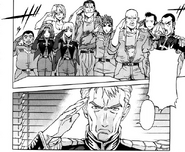 Retrieved from "https://gundam.fandom.com/wiki/Midnight_Fenrir_Corps?oldid=483581"
Community content is available under CC-BY-SA unless otherwise noted.