He is a member of the 08th MS Platoon, and is a corporal in rank (though he takes over from Eledore in terms of rank). He is from Side 2, and in the first episode, he joins the military and meets Shiro on a transport ship on the way to Earth. He has left behind his girlfriend B.B., a beautiful woman with glasses, in his hometown, and he frequently writes to her in his spare time.

In episode 4, the squadron encounters the Apsalus during a flight test. Shiro orders the platoon to let it pass, but they are so terrified by the sight of the enemy aircraft that they open fire, and the platoon's presence is noticed. Also, in episode 6, he temporarily boards a Gundam Ground Type and shoots the Apsalus. Again, he cowers in fear in front of the oncoming enemy machine and is in danger. Although his unreliable personality does not make him a good fighter, he does have guts when the time comes. In episode 9, when Karen's Gundam is attacked by an Acguy and is in a pinch, he is ordered by Eledore to take the bait by sliding on the surface of the water with the hover truck, attracting the attention of the enemy.

In "Last Resort", he is discharged from the army and goes on a journey with Kiki to find Shiro, who is still missing after the war, with the wishes of all the members of the former 08 Platoon. After being dumped by his girlfriend B.B., he receives a letter and photo from her telling him that she has gotten married and had a baby, which makes him very depressed and he drinks himself into a stupor. In episode 5, the difficulties of long-distance relationships predicted by Eledore come true. 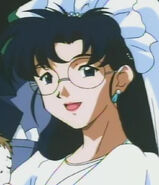 B.B., the woman Michel wrote to.