Meyrin Hawke (メイリン・ホーク, Meirin Hooku?) is a character from Mobile Suit Gundam SEED Destiny. She is Lunamaria Hawke's younger sister and a member of the Minerva bridge crew, where she serves as a communications controller for its complement of mobile suits.

In contrast to her sister who is cheerful and open, Meyrin is shy and somewhat closed off even from her own sister. Despite this she does maintain a friendly relationship with everyone on the ship but only seems to hang around her sister more than anyone else, however despite her closeness to her sister Meyrin carries somewhat of an inferiority complex to Lunamaria; this seen when Lunamaria is in the shower and Meyrin tries on her miniskirt and is annoyed when it doesn't fit her. Also like her sister she has what seems to be a one-sided crush on Athrun Zala, however due to her shy nature she is unable to express herself.

Since their early days, Meyrin and Lunamaria were great admirers of Lacus Clyne, but this led to conflict when they competed with the fake Lacus for Athrun's affections. Upon meeting the real Lacus, Meyrin would be more relaxed, and it is indicated in the Omake Quarters that the former idol is among the few Meyrin is truly able to open herself to.

Meyrin is the youngest member of the bridge crew, but she supervises the ship's mobile suits and communications. Her greatest asset is multi-tasking in tactical coordination and hacking systems. She was trained to delegate information between the bridge, the MS pilots, communications between Minerva crew members for tactical coordination, and their complex launching procedures with professional efficiency. She has also been shown to be skilled or at least capable of using firearms.

Meyrin was born with her sister, Lunamaria, on one of the PLANT colonies and they both entered ZAFT. Lunamaria became a red coat mobile suit pilot, while Meyrin became the CIC officer. Both of them became stationed on the newly developed battleship Minerva from its launch through the Second Alliance-PLANT War.[1]

On the Minerva: Attraction to Athrun

Meyrin is attracted to Athrun Zala. In one episode, Meyrin tries to put on her sister Lunamaria's skirt and is displeased when it is too small for her and during this scene Meyrin says how highly she thinks of Athrun Zala. In episode 36, at the Gibraltar military base, Athrun is framed as a traitor. To avoid pursuit he ducks into Meyrin's room, then plans to leave rather than implicate her. However, Meyrin helps Athrun escape by lying to the men chasing him so they would think she was alone in her room, hacking base security, and driving Athrun to a hangar where he can steal a mobile suit. Although Meyrin does not originally intend to escape with Athrun, she chooses to join him when they are discovered by Rey Za Burrel.

The two attempt to escape in a ZGMF-2000 GOUF Ignited, but are pursued by Rey and Shinn Asuka in their new mobile suits, the ZGMF-X666S Legend and ZGMF-X42S Destiny, respectively. The GOUF Ignited is destroyed by Shinn and crashes into sea. Gilbert Durandal frames Meyrin and Athrun, who are thought to be dead, as being agents of Logos.

As they were facing ZAFT in the battle of Orb, Athrun urges Meyrin to leave him and avoid the battle, but Meyrin insists on staying and asks not to be left behind once again. Athrun would relent and Meyrin would have her first meeting with the real Lacus Clyne as she helped Athrun overcome his personal demons.

Later, Cagalli Yula Athha, asks Meyrin to take care of Athrun just before the Archangel launches into space which confuses her. She does not see Cagalli's tears as the woman leaves.

Meyrin accompanies Athrun, Lacus Clyne, and Kira Yamato on a fact-finding mission into Copernicus disguised as a shopping trip. While there, Lacus receives a desperate message from Meer Campbell, Lacus' impersonator. While Meyrin and Athrun both suspect it is a trap, Lacus insists on going anyway.

At the meeting, they are attacked by several men, who are led by Meer's bodyguard, Sarah. Athrun deals with most of the attackers while Meyrin and Kira protect Lacus and Meer, at one point even managing to shoot a grenade that was intended for Lacus out of mid-air back at Sarah. Meer is mortally wounded by a bullet intended for Lacus, but Meyrin and the others are unharmed. Meyrin joins the Archangel crew in their impromptu funeral for Meer and then she, Athrun, Kira, and Lacus read Meer's diary. (However, in Gundam SEED Destiny: The Edge, Meyrin is absent in during the trip and is, instead, replaced by the three DOM trooper pilots.)

After the war, in Gundam SEED Destiny: Final Plus, Meyrin, along with Luna, Shinn, and Athrun visit the memorial for the fallen in Orb. They are later joined by Kira and Lacus. Meyrin and Athrun appear to have made peace with Lunamaria and Shinn, and the two leave together with her trailing behind Athrun, and Shinn and Luna tailing behind them. In Gundam SEED Destiny:Special Edition, Meyrin is seen with Lunamaria, Shinn, all of which, being in their old ZAFT uniforms , stating that Meyrin has returned to being a ZAFT soldier along with her sister and Shinn in PLANT. The three are seen traveling to the PLANT Supreme Council along with a now ORB Commander (admiral in GSD Special Edition 4) Athrun Zala, to escort the now ZAFT Commander, Kira Yamato to see PLANT's new Chairwoman, Lacus Clyne.[2] 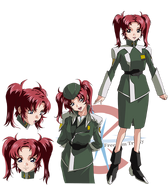 Meyrin shocked after Januarius City has been destroyed by Requiem