Meyer (マイヤー, Meyer?) is a fictional character from the Mobile Suit Gundam anime series and the Legend of the Universal Century Heroes: MSV-R manga.

During Operation British, Meyer together with Shin Matsunaga was tasked with protecting the depopulated colony cylinder Island Iffish from Side 2, Bunch 8 that was used to drop on Earth. Although the Earth Federation Forces made a nuclear strike, the colony was only broke into giant pieces as it hit Sydney and several other locations.

Meyer was one of Dozle Zabi's co-pilots of the MA-08 Big Zam. He, along with the other two, escaped the Big Zam during the battle of Solomon, under orders from Dozle Zabi, who then took over the Big Zam. He was later seen saluting to Dozle in his Big Zam, before the latter was attacked by Amuro Ray and Sleggar Law.

After that, Meyer personally delivered the grave news of his commander's death to his wife, Zenna Zabi, Meyer made a decision not to join with Kycilia Zabi's forces at A Baoa Qu (because she refused to send reinforcements to her brother), instead he became the guard of Dozle's wife and daughter. He engaged a Federation MS squad trying to capture the Zabi family members, but was overpowered and would had been killed if not for Shin Matsunaga's sudden arrival.

It was revealed that Meyer was a member of Dozle's Guards. He was an old comrade in arms of Shin Matsunaga during Operation British and the Battle of Loum. He was promoted to lieutenant during the Antares Operation. After the One Year War, he and Olga Talvitie served as escorts for Zenna Zabi and Mineva Lao Zabi's ship while they escaped to Axis where he would later serve as a mobile suit instructor alongside Olga. By U.C.0096, he is married to Olga and has several children. 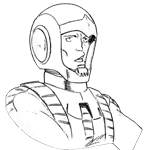 Retrieved from "https://gundam.fandom.com/wiki/Meyer?oldid=376077"
Community content is available under CC-BY-SA unless otherwise noted.