Meran (メラン, Meran ?) is a character from Mobile Suit Gundam: Char's Counterattack and Mobile Suit Gundam Unicorn. He is a member of the Londo Bell task force and Bright Noa's right-hand man. He serves as the Commander of the Ra Cailum.

Meran still served as the second-in-command of the Ra Cailum throughout the Third Neo Zeon War. At the time, a third Neo Zeon movement, known as "the Sleeves", continued the fight against the Federation and thus were denounced as terrorists. After the camouflaged Sleeves frigate called the Garencieres crashed on Earth, the Earthside Zeon remnants that had been fighting guerrilla warfare since the end of the One Year War, launched an assault on the capital of Dakar. The Ra Cailum arrived too late to assist. As soon as their elite Tri-Stars launched, the Zeons had already fled after causing massive collateral damage.

Subsequently, Captain Bright was summoned to the Marcenas estate on behalf of Chairman Ronan Marcenas, who ordered the Ra Cailum to track down the Garencieres, as well as adding his son Riddhe Marcenas to the crew.

None too soon, the Zeon remnants launched an all-out attack on Torrington, catching the military base by surprise. The AMA-X7 Shamblo, piloted by Loni Garvey, started laying waste to the city. The Tri-Stars and Riddhe/Delta Plus sortied to push back the invaders. At the same time, the RX-0 Unicorn Gundam dropped from the Garencieres in an attempt to stop the Shamblo. Meran was among the many to witness the Unicorn transform into a Gundam and engaged the Shamblo in battle. The fight ultimately ended when Riddhe/Delta Plus used the Unicorn's beam magnum to kill the Shamblo's pilot while the Tri-Stars eradicated the Zeon forces. Bright then gave orders to Riddhe to capture the Gundam. Suddenly, the Vist Foundation dispatched the RX-0 Unicorn Gundam 02 Banshee, which captured the Unicorn and brought it aboard the Ra Cailum.

The ship soon became stocked with Foundation staff, to the annoyance of the crew. After Bright reminded the crew that they still serve General Staff HQ and that their objective is the pursuit of the Garencieres, Meran approached him in the hallway, confirming that the supplies sent to the carrier Garuda were made for royalty. They then headed to the cell of the Unicorn's pilot, Banagher Links, who refused to give up the final La+ coordinates to the Foundation, where Bright talked to the boy.

Afterwards, the two commanding officers went to a comm station to hear Beltorchika Irma, who explained that the Dogosse Giar class ship, the General Revil, had been deployed by General Staff HQ for a covert operation. Bright guessed that they were targeting the Nahel Argama, whose crew knew of Laplace's Box. Bright's old ship would not stand a chance against the General Revil, so Beltorchika suggests using their contacts in Luio & Co. to warn them. However, Bright wanted to get in contact with the Garencieres. Using Kai Shiden as an intermediary, they conspired by liberate both the captive Mineva Lao Zabi and the Unicorn from the Foundation.

As the Tri-Stars, Banshee and Riddhe escort Banagher/Unicorn to the Garuda, the carrier came under attack by the Garencieres. The Ra Cailum attempted to go on alert, but Meran stopped them, reminding the bridge staff that their objective is to escort the Unicorn and ordered the Tri-Stars to maintain observance. Ultimately, their goal succeeded. But as the Garencieres went to rendezvous with the Nahel Argama, engine trouble forced the Unicorn to emit a green psychofield similar to the one that repelled the asteroid Axis, enabling the Garencieres to make orbit.

The Ra Cailum then made for space in hopes of catching up the Nahel Argama, now captured by the Sleeves after they chased off the General Revil. Meran remained by Bright's side as he was chastised by the Foundation's current leader, Martha Vist Carbine. She accused Bright of giving the Unicorn the means to escape and asserts that the Nahel Argama and the Rewloola, the Sleeves' main ship, are on their way to the Moon. Bright admits that his plan backfired, with Frontal capturing the Nahel Argama due to his quick response. Martha asks how he could lose track of the group, and Bright explains that the standard patrol fleets were removed from the area due to the nature of the General Revil's mission, and subtly implies the Vist Foundation's hand in the conflict. He confronts Martha on what Laplace's Box actually is, and she tells him about The Lady and the Unicorn tapestry that has been a Vist keepsake. The "box" is guarded by a white unicorn and a black lion, and Martha tells Bright that if they can't protect the box, then they'll destroy it as she dismisses the services of Londo Bell. 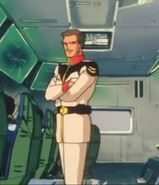 Meran with Amuro and Bright during the second Neo Zeon conflict.