The Memento Mori is a satellite free-electron laser strafing device[1] that was installed onto the lower orbital ring of the solar satellite system in season 2 of Mobile Suit Gundam 00.

The Memento Mori has the destructive yield of a nuclear weapon, and is capable of instantly vaporizing an entire small country off the map. The weapon itself can fire downward to raze any target on Earth (relative to the side of the planet it is facing) or upwards into space from where it is stationed; it draws power from the solar power generation system and utilizes a particle accelerator for operations[1], both of which are installed within the orbital ring.

However, Memento Mori has several key flaws that make it a strategic weapon rather than a tactical weapon. The weapon suffers from a limited firing angle (approximately 30-45 degrees from vertical) relative to distance resulting in a cone-like blind spot. The Memento Mori makes up for this by anticipating the movement of enemy targets and firing at the enemy from long-range before the enemy can reach their intended destination. Secondly, the satellite weapon itself is stationary, making it a very vulnerable stand-alone weapon without the protection of an A-Laws battle fleet. Thirdly, although the Memento Mori is extremely powerful, the weapon itself suffers from a long charge-up time, thus making it unable to fire in rapid succession. In addition, because the Memento Mori is primarily an area bombardment weapon, it is unable to target rapidly moving targets accurately and is extremely ineffective against targets that are either fast or small enough to dodge the beam it fires.

Its greatest weakness is its "electromagnetic resonator", a component critical to firing the Memento Mori. Should the chamber be destroyed or damaged, the Memento Mori's energy systems will overload and will result in a chain reaction explosion; the chamber itself is built under the right side of its hull armor. It is very difficult to destroy and/or penetrate its thickly armored body without superior firepower. In Celestial Being's case, the quickest solution was to use 00 Gundam's Trans-Am Raiser to create an ultra-sized beam saber to cut down the weapon(s). It is unknown how many were intended to be made, but at least two were known to be made.

It is unknown when the Memento Mori was designed or built, but Innovator's Ribbons Almark forwarded the technology to the Federation for development. Wang Liu Mei was Ribbon's sponsor for the project in their mutual beliefs to Aeolia Schenberg's plan for planetary unification and preparing humanity into space.

To accelerate the unification of the world, Ribbons decided to activate the Memento Mori to test its capabilities and wipe out Kingdom of Suille at the same time. A-Laws successfully vaporized Suille instantly with a single blast, nearly destroying several nearby Federation Army units as well. Later, Memento Mori was seen destroying the Kingdom of Richera in a single shot.

The A-Laws had plans to eradicate any Katharon base they can find. At the same time, the Katharon deployed their entire fleet to destroy the weapon. However during this time the Memento Mori showed that it was not only capable to fire on Earth but also into space. It used this ability to destroy half of the ships in Katharon's first fleet.

The remaining Katharon forces were decimated by the A-Laws mobile suits defending the Memento Mori, until Setsuna F. Seiei arrived in the 00 Raiser. While Setsuna diverted the defending mobile suits, including Hiling Care's Gadessa, the Ptolemaios 2 moved into position to attack. After using Arios's Trans-Am to dodge the Memento Mori's beam, Tieria Erde uses Seravee GN Bazooka II to blast a hole in the weapon's outer bulkhead, allowing Lockon to snipe its light resonance chamber with Cherudim's GN Sniper Rifle II. This caused a chain reaction that destroyed the Memento Mori and Aber Rindt's command ship.

In the aftermath of the superweapon's destruction, the ESF government publicly announced that it was a simple satellite in geosynchronous orbit. This gave the A-Laws the leverage to take direct control of the regular army to enhance security, prompting discontent over a small faction of the military, who planned a coup d'état.

During the Federation Army's coup d'état attempt, in which the dissidents occupy the AEU's orbital elevator, La Tour, the A-Laws unveil another Memento Mori to destroy the elevator's low orbital station. Setsuna and Saji Crossroad sortied against the second Memento Mori in the 00 Raiser and tried to destroy it with the Raiser Sword. However, the attack only severely damaged the cannon, and it managed to fire and caused parts of the orbital elevator to collapse. Four months later, the repaired cannon was destroyed by 00 Raiser.

With the death of Wang Liu Mei (the weapon's sponsor), the fall of the Innovators, and the ESF disbanding A-Laws, no more further versions of the Memento Mori were built. While the weapon was powerful, it was a costly weapon delivery system and publicly unfavored. The designs were "mothballed", but unclear were the designs salvaged for different or newer developments in the future. 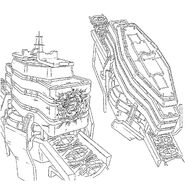 Memento Mori before and after 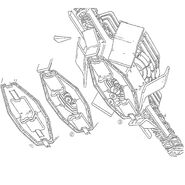 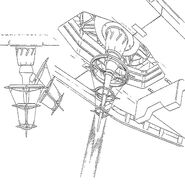