When he was young, he was a junk dealer. As he grew however, he was able to make a business and become rich enough to own a colony near Side 1, which a few thousand employees lived in.

Meitzer is the patriarch of the Ronah family and the spiritual leader of the Crossbone Vanguard. Meitzer has worked for decades to realize his family's dream of a nation dedicated to the principles of "Cosmo Aristocracy." Having driven away his daughter Nadia with his ideological zeal, Meitzer now hopes to replace her with his granddaughter Cecily, whom he intends to turn into a living symbol of his newly founded Cosmo Babylonia. 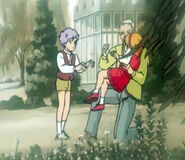