The Me-02R Messer is a mass-produced mobile suit developed from the AMS-119 Geara Doga. It was featured in the Mobile Suit Gundam: Hathaway's Flash film and novel.

The mainstay mobile suit of the anti-Earth Federation terrorist organization "Mafty" in U.C. 0105, the Messer was produced by Anaheim Electronics under Mafty's commission.[1] Created as a part of the same line as former Neo Zeon mobile suits like the AMS-119 Geara Doga and the MSN-04 Sazabi, the Messer has various Zeon-type mobile suit design elements, such as the mono-eye sensor in the head, rounded armor parts and spiked shoulder armor.[1] This is likely done to hide Anaheim Electronics' involvement with an anti-Federation organization.[1] However, features such as air intakes on the chest, which were usually only seen on Federation MS, were also incorporated.[1]

Despite its large size and heavy armor, the Messer has high maneuverability and mobility due to powerful main thrusters on its back as well as various sub-thrusters on its legs and waist.[1] It also has vectored tail stabilizer on its back that can be used for air braking and attitude control when free falling from high altitudes.[2] The Messer was intended for guerilla warfare and adopted armaments including vulcan guns, beam sabers, a beam rifle and a shield so as to be highly versatile.[1] It can also use various weapons derived from Federation MS.[1] Most of the time, the Messer will enter combat using the Galcezon sub-flight system, which is armed with two mega particle cannons. The MS name differs with the parts configuration used; for example, the Messer piloted by Gauman Nobil was known as the Me02R-F01 Messer Type-F01.[1][2]

Three vulcan guns are mounted on each side of the head, for a total of six.

A Beam Saber identical to those used by the RGM-89R Jegan A-Type, it emits a beam blade when used for melee combat.[1] One can be stored on the underside of the spiked right shoulder armor and two more can be stored in the Large Shield.[1]

A Beam Rifle specifically designed for the Messer, it has a long barrel and is equipped with an optical sight on the right side that enables long-range attacks such as sniping.[1] The Long Beam Rifle has two E-packs mounted in parallel under the barrel, and these E-packs are the same ones used by Federation MS such as the Jegan A-Type.[1]

A large physical shield with high defensive abilities against beam weapons.[1] It also functions as a weapon rack that can store spare E-packs and Beam Sabers.[1]

The novel version of the Messer also had small, two-tubed, multi-launchers mounted on the shield, similar to those used by the Geara Doga. 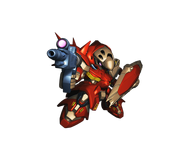 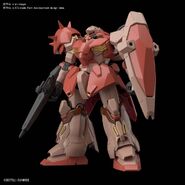 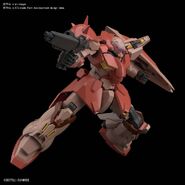 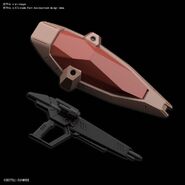 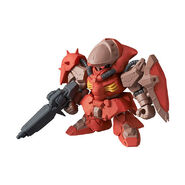 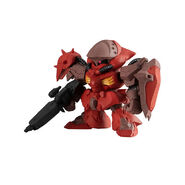 Retrieved from "https://gundam.fandom.com/wiki/Me-02R_Messer?oldid=468585"
Community content is available under CC-BY-SA unless otherwise noted.