When the Earth Alliance invaded Orb in C.E. 71, Mayu and the rest of her family were forced to evacuate. However, she dropped her pink cellphone down a slope on the way to the evacuation point. Though the phone barely worked due to Neutron Jammer interference, Shinn knew that her sister still treasured it and went to retrieve it. However, immediately after Shinn retrieved the phone, a clash between the Freedom Gundam and the Calamity Gundam triggered an explosion, killing Mayu and her parents and leaving Shinn the only survivor.

Her cellphone, which contained a voice message from her, became Shinn's only memento of his lost family. 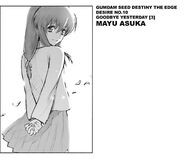 Mayu from The Edge Desire
Add a photo to this gallery

Retrieved from "https://gundam.fandom.com/wiki/Mayu_Asuka?oldid=444187"
Community content is available under CC-BY-SA unless otherwise noted.