Matt Healy (マット・ヒーリィ) is a lead character in the Mobile Suit Gundam: Lost War Chronicles video game. In the game, the player assumes his role in the Earth Federation Story.

In November, U.C. 0078, tension between the Earth Federation and the Principality of Zeon was rising rapidly. Matt, then still an officer cadet, was spending what he knew was his last vacation before the war in Sydney, Australia. While there, he meets Duchamp Lawton, a geologist from Side 3, who was beaten by a mob that suspected him of being a Zeon spy.

In the next few days, Matt was assigned to keep an eye on him while he work, and the two quickly became friends. As it became clear that war was inevitable, Duchamp confessed that his research on Earth's mineral resources could easily be used for war, but promised Matt that he would use his work for all of mankind, not for Zeon. He also asked Matt to do whatever he can as a soldier to end the war as soon as possible.

On the last day of Matt's vacation, he saw Duchamp in an alley, being handed an envelope full of cash by a shadowy figure. Thinking that Duchamp sold his research to the Zeon military, Matt drew his gun, but ultimately did nothing and left. Two months later, at Jaburo, Matt saw the news of Sydney being obliterated by Operation British. At the same time, he received a package from Duchamp containing a shark tooth fossil he uncovered in Australia and a letter.

In the letter, Duchamp explained that he wanted the fossil to be a token of their friendship, and that though he was approached by Zeon agents multiple times, he still refused to give his research to the military. Finally, he wrote that he would continue his research in Australia. Knowing that his friend was killed in the colony drop, Matt vowed that he would spare as many lives as possible in the coming war.

During the One Year War, Matt became the leader of the Delta Team, an experimental unit created to gather mobile suit live combat data. The team consisted of Matt, pilots Anish Lofman and Larry Radley, and mechanic Annie Brevig. Under the order of General John Kowen, the team was assigned to Canada as part of a larger plan to distract Zeon forces worldwide for an upcoming major operation in Europe. For this mission, the team was assigned a new mobile suit, the RX-75-4 Guntank (which no other unit could use effectively) and a new operator - Noel Anderson.

In Southwest Canada, the Delta Team encountered a Zeon MS team with three Zaku II Ground Types. Noel mentioned that the Zakus have all being waterproofed due to the large lake nearby, and suggested repeated hit-and-run attacks to wear down the enemies, but Matt came up with a different plan.

After tricking the Zeon units into calling reinforcements by leaving behind footprints with their GM Ground Type, Matt and Anish lured the pursuing mobile suits into the lake. Seeing that the GMs slowed down significantly in the water, the Zeon commander ordered his mobile suits to go after them. However, they were unknowingly led into the range of Larry's Guntank, and Larry was able to destroy all but one of the Zeon mobile suits.

The last survivor, a Gouf, attacked Matt's GM. However, since its heat sword was weakened by the water, it was unable to cut through the GM's shield. The Gouf attempted to attack Matt with its heat rod, but Matt quickly evaded and destroyed the Gouf's head with the GM's shield claws.

After the mission, Noel asked Matt why he did not destroy the Gouf. Matt replied that leaving it in the lake would cause Zeon to divert their forces to recover it, and that destroying it would result in unnecessary deaths. Anish explained that Matt believed the war would be over soon, and that unnecessary bloodshed should be avoided, causing Noel to be surprised that a soldier would think this way. 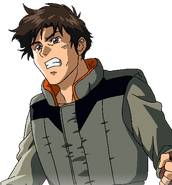 Retrieved from "https://gundam.fandom.com/wiki/Matt_Healy?oldid=438289"
Community content is available under CC-BY-SA unless otherwise noted.