Wu Wanglong, better known by the alias Master O (老師O, Rōshi O?), is the engineer and creator of Shenlong and Wufei's mentor. Of imposing stature and spear-bald, the powerful and athletic Master O is an expert in many forms of martial arts, a skill he brings to the mobile suits he creates.

Master O stands out among his fellow Gundam scientists, being both in much better physical shape and preferring action to words due to his martial arts ability. Despite this, he was no less sociopathic than the other Gundam Scientists, and seemed to hold life in even less regard as he was the only one of the five to support the original plan of Operation Meteor.

Master O was one of the scientists who designed the Tallgeese but abandoned completing it after they become disillusioned with OZ actions. They separate to different colonies before the Alliance shut off travel and communications between individual colonies. They separately constructed the Gundams out of Gundanium Alloy for retaliation against OZ. He trained Chang Wufei to be its pilot.

Unlike the other Gundam engineers, he wanted his young ward to follow Operation Meteor, disregarding his wife's death; this led to a rift between Wufei and Master O. Nonetheless, Wufei refused to go through with the plan, because his home colony was intended for the drop.

Master O was eventually tracked down by OZ and captured, along with his fellow scientists and commissioned by Lady Une to create mobile suits more powerful than the Gundams. Together, the scientists created the OZ-13MSX2 Mercurius and OZ-13MSX1 Vayeate.

However, in secret, the scientists were also reconstructing Deathscythe and Shenlong. Duo Maxwell, the former's pilot, stumbled upon this when he was infiltrating the lunar base. The scientists promised the Gundams would be complete in a month. But they needed to maintain their cover in the meantime, so therefore Duo was have to be captured. Master O had to beat him up for appearances. Eventually, Chief Engineer Tubarov Bilmon cut off the air supply in both the pilots and scientists' cells, intending on suffocating them. However, Lady Une returned just in time to free them.

The scientists were eventually captured by the White Fang, a group of colony citizens who were out to complete Operation Meteor and ensure independence from the Earth. They had the scientists complete the captured OZ battleship Libra. However, the scientists made sure that the main cannon could not fire consecutively and had to be repaired after each shot.

During the final battle, the scientists were found by Duo. They asked him to bring them over to Peacemillion, which crashed into Libra's main cannon, where they will hot wire its engines to push the battleship away from the Earth. They did not care if one of them dies, if it is to atone for their sins. Once aboard Peacemillion, they begun their work, only for Quinze Quarante to try and stop them. He berates them for changing the objective of Operation Meteor, for not quicken humanity's own self-awareness. The scientist defend that the Gundams were good enough and set off the explosion, killing themselves and Quinze, while starting up Peacemillion's engines. 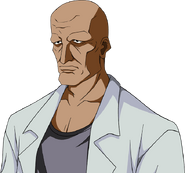