Master Asia (マスター・アジア, Masutā Ajia?) was the primary alias of Gundam Fighter Shuuji Kurosu (シュウジ・クロス, Shuuji Kurosu?), a primary antagonist in the animated television series, Mobile Fighter G Gundam. Master Asia was Domon Kasshu's teacher, and the former King of Hearts of the Shuffle Alliance. In the latter half of the series, Master Asia was more commonly referred to by his other alias, Undefeated of the East (東方不敗, Tohofuhai?).

Master Asia, or rather Shuuji Kurosu fought in the 7th Gundam Fight as the Gundam Fighter for Neo Japan and used the Yamato Gundam as seen in the manga of the same name. Shuuji fought the individual members of the-then-to-be Shuffle Alliance in the Gyuana Highlands. After his battles with them, Master Asia and the Shuffle Alliance become friends and came to the rescue of Neo Germany's Gundam Fighter, Wolf Heinrich, who was unfairly attacked by both Delos Argos and Hell Snake's Gundams at once. After they were defeated, Shuuji faced off with Heinrich and ultimately failed to defeat him due to the mirage like abilities of Wolf's Gundam. Afterwards, Wolf and Shuuji went to the Guyana Highlands to train and compete. Here, Shuuji refined Tohoufuhai and developed the Sekiha Tenkyoken. Wolf and Shuuji had an exchange as friendly rivals and promised to face each other in the Gundam Fight Finals.

A man by the name of Dr. Chaos, lead a terrorist force of the same name, created a force of Death Army machines and gigantic Mobile Armor which he attempted to use to disrupt the Gundam Fight. The Shuffle Alliance, with the newfound power of their Shuffle Crests fought against him and Dr. Chaos was defeated by Shuuji. Unfortunately, as that happened right in the middle of the Finals, Shuuji and company were de facto disqualified due to their failure to reach the designated country by the appointed time, and Wolf became the champion of the Gundam Fight. Because of that, Shuuji was dismissed as the Gundam Fighter of Neo Japan, chose to leave, instead became the Gundam Fighter of Neo Hong Kong, and assumed the name of Master Asia.

In the Gundam Fights that followed, Master Asia perfected his style and in F.C. 48, he adopted the eight year-old boy, Domon Kasshu, as his student. Domon had run away from home and snuck on board a ship that carried Master Asia, who admired him and sought to learn his skills. Master Asia decided to shelter Domon and agreed to teach him Tohoufuhai.

The champion of the 9th through 11th Gundam Fight was Neo England's Gentle Chapman. Dismayed by the shift from martial arts to beam weapons as a result of Gentle Chapman's victories, Master Asia used the Kowloon Gundam and Tohoufuhai and succeeded in proving the power of martial arts with his victory in the 12th Gundam Fight. In his years as a Gundam Fighter, Master Asia watched the Earth continue to decay and battles between the Gundam Fighters inflict unprecedented damage upon the planet. He resolved that mankind's influence must be removed in order to purify the Earth. Because of that, and possibly because of the mental power of the Devil Gundam, Master Asia came to the conclusion that humanity must be destroyed so that the Earth might return to its natural environment.

Master Asia first appeared assisting Domon and Rain Mikamura in Shinkjuku from a pair of Death Army Suits. Master Asia briefly appeared veiled in a tanish grey cloak and face wrap which hid his identity, but after he revealed his skills, Domon quickly identified him as Master Asia. He then exchanged with Domon their traditional litany:

Master Asia explained that he had been coordinating the defense of Shinjuku, but that it had been going badly. In a counterattack, Domon launched Master Asia in his Kowloon Gundam's Chokyu Haoh Den'iedan Super Attack. That blasted him through most of the Death Army, and caused them to retreat. Domon, Rain, and Master Asia returned and planned further defense. Master Asia, however, was working in secret with the Death Army. Rain discovered that and Master Asia captured her. He carefully hinted to Domon about Rain's disappearance, but Domon did not realize what happened. Eventually, after he followed Master Asia, Domon discovered that he was the one responsible. Master Asia attempted to recruit Domon into the Death Army, but his persuasions failed. Master Asia sent Chibodee Crocket, George de Sand, Sai Saici, and Argo Gulskii to fight Domon, as they had all been converted to his service by DG Cells. Master Asia attacked in his Master Gundam and he and Domon battled. Master Asia's victory seemed assured, however, his efforts were thwarted by the old Shuffle Alliance who appeared and attacked him. While initially, the old Shuffle Alliance was unsuccessful in defeating Master Asia, they opted to sacrifice themselves in a kamikaze attack in order to stop him and purify the DG Cells from Chibodee and company. In doing so, the old Shuffle Alliance passed on their Shuffle Crests to the four and they became the new Shuffle Alliance. Master Asia, showed some sadness at the loss of his former comrades, and fearing his loss, he summoned the Devil Gundam to attack. The battle was fierce, and Domon nearly defeated the Devil Gundam, but the image of his smiling brother's face appeared in his mind and prevented him from finishing it. Master Asia then retreated along with the Devil Gundam and Kyoji Kasshu.

At Neo Hong Kong, Master Asia appeared dramatically as one of the Final Gundam Fighters in the Tournament's lineup. Chairman Wong Yunfat, whom Master Asia worked with, declared that it was up to Domon and Master Asia to performing the opening to the Gundam Fight. In a tense moment, the two shared the litany once again, and opened the Gundam Fight with the final lines: "Look, the East is Burning Red!"

Despite his altered viewpoint, Master Asia continued to respect Domon, and while he and Wong schemed in order to defeat him, he was determined to do so in an honorable way. While Master Asia would not hesitate to throw tough odds against Domon, he did so only to test Domon's resolve and ability to win. When Domon was set up to fight Schwarz, Master Asia feared that he was not ready and he summoned Domon to a devastated area of Neo Hong Kong in order to further train him. By that time, Wong and Master Asia had an increasing falling out as Master Asia more and more regarded Wong's tactics as unfair and dishonorable. Wong had thus decided that Master Asia had fulfilled his role in his plans and thus sent the Gundam Heads to kill both of them as they fought. Master Asia saved Domon, however, the two fell into an underground cavern and Master Asia's leg was injured. The two managed to escape from their predicament and Master Asia finally explained to Domon the reason for his actions. He told Domon that the Gundam Fight was what was destroying the Earth. The blatant disregard for the land on which it took place, the outright exemption of damage to cities, buildings and the environment from being in any way criminal, as long as it was due to the Gundam Fight. He cited the vast city ruins around them as an example of that. Master Asia then taught Domon his ultimate technique, the Sekiha Tenkyoken.

Master Asia and Domon engaged in a final battle on Lantau Island. There Master Asia said that he wanted Domon to be the new Core Life Unit of the Devil Gundam, and explained that he had used the Finals in order to make him strong enough for that role. Domon could not accept that. Instead, when Schwarz pulled Kyouji out of the Devil Gundam, Domon killed him, and thus stopped the Devil Gundam. Master Asia said that was unforgivable and he attacked and ultimately paralyzed the God Gundam with a new technique, the Juuni Ouhouhai. While Domon was paralyzed, Master Asia gave his full conclusion that humanity was destroying the Earth, that the Devil Gundam would remove man's detrimental influence, and then regenerate the planet. He then explained how the Ultimate Gundam had evolved into the Devil Gundam. Domon sensed Master Asia's sadness and reminded him that humanity was a part of nature and that to destroy it was to destroy nature's balance. The two clashed, with their Sekiha Tenkyoken's. Domon's overwhelmed Master Asia enough to knock him back, then Domon finished the battle, and defeated Master Asia by combining the Sekiha Tenkyoken with his own God Finger (Erupting Burning Finger) for the Sekiha Tenkyo God Finger attack.

After Master Asia was defeated, Domon held him in his arms. Master Asia revealed that he had a terminal illness (which also prevented him from being able to replace Kyoji as the Devil Gundam's new Core Life Unit), opened his shirt to reveal that he never once had any DG Cells in his body, and that everything that he did was through his own will. Master Asia said that he learned what a terrible mistake that he was going to make, and that mankind was indeed a necessary part of nature. Master Asia declared Domon the only true King of Hearts and then he asked him to recite the litany once again: "Look, the East is Burning Red!" They finished reciting it, and, as the sun rose, Master Asia remarked on its beauty, then he died.

Master Asia made one last appearance after his death during the battle with Grand Master Gundam. He appeared and encouraged Domon to fight on, alongside all of those whom Domon loved that fell, Kyoji, Schwarz, and his mother, Mikino Kasshu.

Master Asia owned a horse named Fuun Saiki (風雲再起, Fu'un Saiki?), who appeared in the later arcs of the story. Like the other participants in the Gundam Fight, Fuun Saiki used the Mobile Trace System to enter a mobile horse of the same name. The mobile horse was able to assume both a normal, horse-like form, and one that resembled a flying platform. After Master Asia's Death, Fuun Saiki traveled with Domon.

Fuun Saiki's name came from the second half of the title of the Chinese movie The East Is Red (東方不敗 - 風雲再起, "Invincible East - The Revival"[1]). 風雲再起 is a four-character Chinese idiom meaning "revival".

Master Asia in the opening. 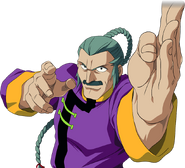 Retrieved from "https://gundam.fandom.com/wiki/Master_Asia?oldid=467770"
Community content is available under CC-BY-SA unless otherwise noted.