The captain of the Neo Zeon Endra-class Endra, he is always seen wearing a garnished rose that Haman Karn gave to him, due to his obsession with Haman. He is first seen as an optimistic young officer and finds himself in a few comical situations among his own crew. However, after a series of defeats at the hands of Judau Ashta and the AEUG, control of the Endra is handed over to Chara Soon. He does not appear again until the colony drop on Dublin, for which he was responsible. Although still dedicated to Haman, by this point he has largely abandoned his pacifistic and idealistic concepts (although comments by other characters suggest this may be the result of psychological conditioning and/or attempts to turn him into a Cyber Newtype), and has adapted a colder, more destitute outlook towards battle. He fights for Haman at the Battle of Axis against the rebel forces of Glemy Toto. Mashymre is killed after displaying an impressive amount of Newtype powers and detonating his mobile suit while fighting Rakan Dahkaran and his Döven Wolf team during the Battle of Axis. Many were impressed by this display of power, including Mashymre's beloved leader Haman Karn. Despite this, Haman coldly comments that all it really means is that the number of resources available to her had decreased by one. 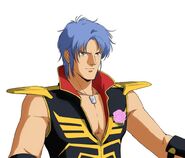 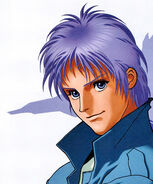 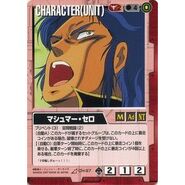