Masaki Shido (シドー・マサキ, Masaki Shido?) (aka Sid in GBN) is a character in the anime Gundam Build Divers Re:RISE. He is the builder and pilot of the MSF-007TE Gundam Tertium. He later becomes The Masked Man (仮面の男, Kamen no Otoko?), piloting the MSF-007SS Gundam Seltsam.

Before falling into a coma while playing GBN, he is stated to be a lover of Gunpla and usually did as he pleased.[1] However, he is also a caring individual, helping those in need.[1] While he can be a little blunt, he has a good nature.[1] Although a top tier Diver, he did not join any force.[1] He seems to have been transformed into The Masked Man while his consciousness remains trapped in Eldora.

An S-Rank Diver and also a very skilled Gunpla builder.[1] He took on tough challenges and cleared them, becoming a top-ranker in GBN.[1]

About half a year prior to the events of Re:RISE, he fell into a coma while playing GBN.[1] The cause for this is unknown, but it is likely linked to an event that happened on Eldora during what he thought to be a Story Mission. It seems his consciousness have been trapped in Eldora since then and he has taken on the identity of The Masked Man, working for the One-Eyes that he once fought against. It is possible that this change in Masaki is due to him falling under the control of Alus.

Masaki Shido's sister, she has been taking care of him since he fell into a coma. 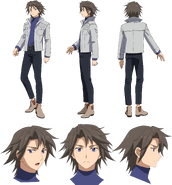 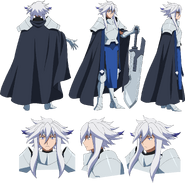