Martin Prochnow (マルティン・プロホノウ) is one of the main characters from the OVA Mobile Suit Gundam MS IGLOO.

Martin Prochnow is the captain of Jotunheim. In command of the Jotunheim since its time as a passenger transport. He is currently a commensurate captain in the Principality Forces. Martin commands several mission operation to test the latest prototype weapons of Principality of Zeon. Captain Prochnow participated in the Battle of Loum were his crew tested the QCX-76A Jormungand, Earth Drop Operations, and responded to the distress call of the orbit-drowning Zeon forces retreating from Odessa.

With Zeon losing their foothold on Earth, Martin and his crew are assign to infiltrate a prototype weapon into the Federation airspace and attack Federation warships launching from Jaburo. Later on, the Jotunheim is sent to A Baoa Qu to defend the E-field. 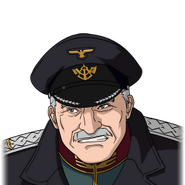