Marticus Rex, later King Peacecraft, was king of the Sanc Kingdom and a supporter of Heero Yuy, well known for his pacifist stance. Having been an observer of the battle to save the Sanc Kingdom in early AC as a rebel Captain, and he married the daughter of Katrina Peacecraft and became King of Sanc Kingdom following her death. He was killed during the occupation of Alliance forces in AC 182. 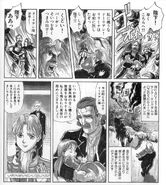 King Peacecraft during the fall of Sanc Kingdom.

Retrieved from "https://gundam.fandom.com/wiki/Marticus_Rex?oldid=465520"
Community content is available under CC-BY-SA unless otherwise noted.