A woman with a somewhat elegant appearance, shoulder length blonde hair, tight cheeks and deep eyes that give off a cold magnetism. She is married to the chairman of Anaheim Electronics, Melanie Hue Carbine. (Martha Vist is often referred to as "The Empress Of The Moon") referring to her position at the head of the Carbine family, which established Anaheim Electronics. Through the Carbine family she has connections with the higher ups of the Earth Federation. She has a sharper mouth than her husband, which makes her a shrewd businesswoman. To the Vist family, it was a rarity to bear a woman of such character.

In her early years, Martha's father was killed by her grandfather, Syam Vist. This is one of the reasons that attributed to her callous personality.

Martha sends Alberto Vist to Industrial 7 in order to murder Cardeas Vist, her brother. She's an ambitious woman who takes part in obstructing the delivery of "Laplace's Box" and aims at seizing the Vist Foundation as well as taking back the box.

Sometime later, Alberto contacted Martha to update her about the RX-0 Unicorn Gundam's intended transfer to Luna II once they've investigated the Laplace station wreckage. Martha noted that he wasn't looking good. Alberto explained that the crew was exhausted, but Martha figured he had probably become attached to the crew. She told him to come to Earth aboard the Klimit, along with Marida Cruz, his captive Cyber Newtype and have her taken to the old Augusta Newtype Lab in North America. Alberto wondered what her plan was, and she said that had her grandfather just told them where the box was, she wouldn't resort to underhanded methods, and though she didn't know what his or Cardeas' plans were for the box, but if it was gone, so was the Vist Foundation. She instructs Alberto to get rid of his sympathies as the Federation was attempting to take the box for themselves.

Later on, she is seen at Augusta labs, where she is reconditioning/brainwashing Marida, showing to Marida - whom she refers to as "Ple Twelve", her original designation - the wreckage of a Qubeley Mass Production Type, which terrifies her. Subsequently she speaks to Alberto again, suggesting to him that he be the one to "give it its orders" ("it" being Marida), as she hands him schematics of the RX-0 Banshee.

Martha relocated to the Garuda in low orbit after the Banshee captured the Unicorn. However, Alberto reported that Banagher had locked the Gundam's systems, preventing them to accessing the next set of La+ coordinates. Marida notes that Banagher has his father's stubbornness and asks Alberto if he was truly unaware he had a half-brother. Alberto confessed he didn't.

Martha resort to using Mineva to change his mind. In a one-on-one conversation, Martha compliments her alias of "Audrey Burne", but states her intention to seal Laplace's Box, and claims that Mineva left Zeon to do the same thing. She tells Mineva that the Unicorn would soon be moved to the Garuda, and that Banagher had locked access to the La+ System. She then reveals to a surprised Mineva that Cardeas was Banagher's father. Mineva realizes that she wants her to convince Banagher to give up the codes, and Martha adds an extra incentive by guaranteeing a place for the Zeon remnants. However, Mineva argues for them to release Marida. Marthat counters that she is serving them willingly, although they reconditioned her. She counters that Zeon also reconditioned her after the Neo Zeon War. Martha states that she simply released Marida's introverted revenge against a flawed male-dominated society.

Sometime later, the Unicorn was to be escorted to the Garuda and then taken into space. However, the transfer was interrupted by the Garencieres, who launch a sneak attack, the Garuda launching its Anksha squadron in response. During the battle, Ensign Riddhe Marcenas boarded the Garuda with the intention to take Mineva from Martha's custody, advising her against taking hostile action against him. Martha, Alberto and their bodyguards listen on in earnest as Riddhe reveals he knows how the Vist family came into power and how Laplace's Box contains a secret that validates the existences of Newtypes that could tear the Federation apart.

Suddenly, they all came under fire from Suberoa Zinnerman, who had stow aboard to rescue Mineva. As the Zabi heir ran off in the confusion, Martha ordered her men to go after her, but Alberto warned her that they have more pressing concerns. He explained that Banagher/Unicorn and Marida/Banshee were grappling with each other atop the Garuda, creating a psychofield threatening to destroy the aircraft. The Vists retreat to the Klimit, where they later witnessed the Unicorn generating a green glow, similar to the psycho-field that stopped the asteroid Axis from colliding with Earth in the Second Neo Zeon War that enveloped both the Nahel Argama and the Garencieres, enabling the latter to make orbit.

Returning to Earth, Martha chastised Bright Noa for giving the Unicorn the means to escape and asserts that the Nahel Argama and the Rewloola, the Sleeves' main ship, are on their way to the Moon. Bright admits that his plan backfired, with Frontal capturing the Nahel Argama due to his quick response. Martha asks how he could lose track of the group, and Bright explains that the standard patrol fleets were removed from the area due to the nature of the General Revil's mission, and subtly implies the Vist Foundation's hand in the conflict. He confronts Martha on what Laplace's Box actually is, and she tells him about The Lady and the Unicorn tapestry that has been a Vist keepsake. The "box" is guarded by a white unicorn and a black lion, and Martha tells Bright that if they can't protect the box, then they'll destroy it as she dismisses the services of Londo Bell.

Martha later dropped in a conference of high-ranking Federation members, including Chairman Ronan, to propose a final solution to preventing the opening of Laplace's Box. 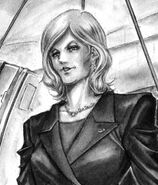