By using a magic wand (a carpet beater and later a flyswatter) given to her by the legendary Red Comet, she can transform into the titular "Magical Ensign Blaster Mari (魔法の少尉・ブラスターマリ, Mahō no Shōi Burasutāmari?)".

Mariko is a fifth grader attending a Zeon elementary school. She eventually receives a magical carpet beater from Char Aznable, transforming into an older version of herself. She pilots the Zaku I Blaster Mari Custom against various Federation RGM-79 GMs and RB-79 Balls. She lives with her father, Michael Starmine, and her two brothers Ban Starmine and Dai Starmine. Her carpet beater was later replaced with a magical flyswatter. 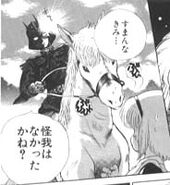 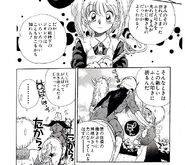 Saving the colony.
Add a photo to this gallery
Retrieved from "https://gundam.fandom.com/wiki/Mariko_Starmine?oldid=460867"
Community content is available under CC-BY-SA unless otherwise noted.