Raised from a young age by Dekim to believe that she would "fulfil her father's wishes" by becoming the leader of the world, Mariemaia was extremely confident and prideful, acting in a dignified manner unbefitting her age and constantly giving the impression that she looked down upon others. However, being only seven years old at the time of the Mariemaia Rebellion, her childish side would occasionaly slip through beneath the facade.

Mariemaia had no memories of her mother Leia, having lost her at age 2. However, she greatly treasured a music box that Leia left her as a Christmas present, and always had it on her person.[1]

Following the Mariemaia Rebellion, Mariemaia recognized the errors of her ways and became much more humble when dealing with others.[2]

Born to Leia Barton and an unknown father (supposedly Treize Khushrenada) in A.C. 189, Mariemaia lost her mother when she was only two, and was brought up by her grandfather Dekim, who taught her that as Treize's daughter, it was her destiny to become the ruler of the Earth Sphere. Unbeknownst to her, however, Dekim saw her as nothing more than a puppet. Presumably, if Operation Meteor went as planned, he would have ruled Earth using Mariemaia as proxy. However, due to the betrayal of the Gundam Pilots, this never happened.

Undettered, Dekim began building a private army with Mariemaia as the figurehead leader. In December, A.C. 196, one year after the death of Treize Khushrenada and the transformation of the World Nation into the pacifist Earth Sphere Unified Nation, Dekim and Mariemaia put their plans into action. Colonists loyal to the Mariemaia Army drugged and kidnapped Relena Darlian during her visit to the X-18999 colony.

Shortly after, she broadcast a speech to the Earth Sphere, revealing her identity as Treize's daughter, declaring X-18999's independence, and declaring war against the ESUN.

Though most citizens dismissed the declaration of war as a hoax, hundreds of MMS-01 Serpent mobile suits soon descended upon the ESUN capital of Brussels, allowing the Mariemaia Army to effortlessly take over the ESUN presidential office. After Mariemaia, Dekim, and Relena move into the presidential office, the office's shelter system is activated, causing the entire presidential office to be retracted deep underground, protected by multiple layers of blast doors. Mariemaia proclaimed to Relena that such a shelter is needed even in peace time, since war, peace, and revolution is a trend that repeats throughout history like an endless waltz. She also proclaimed that history will change with her ascension to the throne of world leader.

Preventer agents Lucrezia Noin and Zechs Merquise engage the Serpents outside the presidential office, but was outmatched by the Serpents due to their massive numbers. They were later joined by Duo Maxwell, Trowa Barton, and Quatre Raberba Winner in their respective Gundams.

Dekim broadcast the fight to the public, declaring that the Preventers and the Gundam pilots are fools futilely resisting the new order. However, Relena interrupted the broadcast, encouraging the people to resist the Mariemaia Army. Mariemaia pointed out that doing so goes against Relena's ideal of total pacifism, to which Relena replies that the willingness to fight for peace is more important than any dogma. Mariemaia simply retorted that Relena only said so because she lost, while herself was destined to be the victor. At this point, the Preventers and the Gundam Pilots were surrounded by Serpents and stopped fighting.

However, Heero Yuy suddenly arrived at Brussels in the heavily damaged Wing Zero. Heero contacted Mariemaia, asking if the shelter system is active. Mariemaia replied that it is, and declared that Heero can see for himself how powerless he is. To Mariemaia's shock, Heero began firing on the presidential office using the twin buster rifle, breaking through the shelter with two pinpoint accurate shots. Mariemaia still desperately tried to maintain her posture, but Relena pointed out that she was now terrified.

Just before Heero could fire a third shot and annihilate the shelter, he had a change of heart and shifted the aim slightly. As a result, the third shot did not destroy the shelter, but still caused the command room to partially collapse. However, Mariemaia and Relena were saved by Lady Une, who had infiltrated the shelter before.

At this point, the people of Brussels began to rally against the Mariemaia Army, backed up by Chang Wufei in the XXXG-01S2 Altron Gundam. Refusing to accept defeat, Dekim asked Mariemaia to take her place as the world's ruler. Mariemaia stiffly worked forward, with an empty look in her eyes. Lady Une was about to slap her, but Relena does it first, saying that now that she knew fear, it was time for her to realize her mistakes. Dekim threatened to shoot Relena, saying that people would always favor the victors, but Mariemaia takes the shot instead and collapses. Dekim did not care, saying that he created Mariemaia in the first place, but was then shot dead by a Mariemaia Army officer for betraying Treize.

As Mariemaia apologized to Relena, Heero arrived at offered to set her free, pointing a gun at her. He fires, but the gun was revealed to be empty. Heero declares that Mariemaia was now dead and that he never had to kill again, then collapses as well. Lady Une called for a medic to treat Mariemaia.

In A.C. 197, Mariemaia was revealed to have survived her wound, though now in a wheelchair. She was taken to visit Treize's grave by Lady Une. 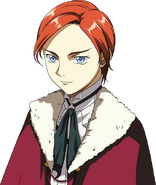