The Mariemaia Army is a private army created under the Barton Foundation to invade and conquer the Earth Sphere.

In A.C. 195, the Barton Foundation began recruiting a private army in secret. Dekim Barton, the leader of the Foundation, used his granddaughter and the supposed daughter of Treize Khushrenada, Mariemaia, to rally supporters, claiming to uphold Treize's ideals. The army trained in secret, and by A.C. 196, the Mariemaia Army already numbered hundreds of soldiers, equipped with the latest Serpent mobile suits. Dekim planned to use this army to seize control of the Earth sphere, now almost defenseless due to the post-war disarmament.

Sometime in A.C. 196, Chang Wufei joined the Mariemaia Army, wanting to find out whether peace built on sacrifice can truly be called peace.

On the Christmas Eve of A.C. 196, the Mariemaia Army finally made their move after a year of silence. They kidnapped Relena Darlian, the vice foreign minister of the Earth Sphere Unified Nation, and took over the space colony X-18999, preparing to drop it if the Earth government does not surrender. Trowa Barton infiltrated the organization under the pseudonym "Ralph Kurt" and attempted to assassinate Dekim, but was stopped by Wufei and was forced to pledge allegiance to Dekim.

The Gundam pilots managed to stabilize the colony, but the Mariemaia Army's main force had already been moved to MO-III. They successfully descended to Earth from there and seized the Presidential Mansion in Brussels. Three of the Gundam Pilots, along with Zechs Merquise and Lucrezia Noin, fought the Mariemaia Army, and disabled the majority of the Mariemaia Army mobile suits without killing the pilots. Inside the mansion, Dekim tried to shoot Relena, but Mariemaia stepped in the way, took the bullet, and was left paraplegic. Dekim showed no remorse for shooting Mariemaia, and attempts to shoot Relena again before one of the soldiers in the room shot and killed him. The soldier in question then expressed his sincere apologies for betraying "His Excellency" Treize Khushrenada. Mariemaia no longer desired to continue the war, and the Mariemaia Incident ended, with the army laying down its arms and dissolving. 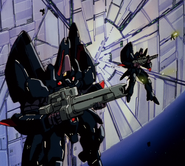 Tauruses used by the Mariemaia Army to defend X-18999's exterior

Leos used by the Mariemaia Army to defend X-18999's interior 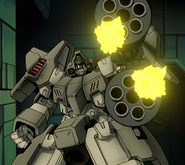 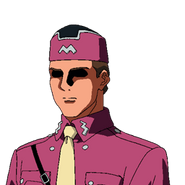 This unnamed soldier is the one who killed Dekim.