A capable pilot and Cyber Newtype. Marida is also proficient in military martial arts. When piloting the Kshatriya Marida primarily utilizes the funnels, usually about 18 at any one time, to overwhelm the enemy with multi-directional ranged attacks. This tactic tends to quickly eliminate weaker enemies while restricting the movement of stronger enemies. Should the funnels prove to not be enough Marida will then close in and use beam sabers. She tends to hold the mega particle cannons in reserve. 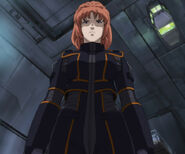 Retrieved from "https://gundam.fandom.com/wiki/Marida_Cruz?oldid=420833"
Community content is available under CC-BY-SA unless otherwise noted.