Maria Pure Armonia (マリア・ピァ・アーモニア) is a character that appeared in the Mobile Suit Victory Gundam anime series. She was the queen of the Zanscare Empire, mother of Shahkti Kareen and also the sister of Chronicle Asher.

Maria Pure Armonia is the Queen of Zanscare Empire and also the spiritual leader. She was born in U.C. 0124 at the Albania colony of Side 1 and lived in extreme poverty. Later, she discovered that she possesses extremely developed psychic powers that allow her to literally heal anyone from any ill. Growing in popularity, she gave a sacred aura that will allow her to see her ideals based on a matriarchal society, believing that men are the source of many ills of life. With the help of Fonse Kagatie, they founded a political party that quickly gained a privileged place in the government of Side 2. By eliminating their opponents and condemning the corrupt bureaucrats to the guillotine, Maria's radical party became extremely popular.

In U.C. 0149, she founded the Zanscare Empire and it began to arm itself for a war applying the doctrine to the extreme. She became the origin of the war between the League Militaire and Zanscare Empire. Her encounter with Uso Ewin when he infiltrated Side 2 made him aware that she had little power over BESPA and that she seems totally disconnected from the genocidal reality of her army. She is the older sister of Cronicle Asher and also the mother of Shahkti Kareen, without really knowing how she lost her daughter who was only a baby at the time. When she was trying to help Uso she was killed by the treacherous Tassilo Vago. 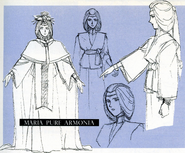