Marcus Guy(マーカス・ガイ) is a fictional character from the After War Gundam X anime.

The Orc captain of the Polypeimos, a large submarine that can carry a number of mobile suits and engages in piracy as well as salvage operations. Hired by Olba Frost to salvage equipment in the Sea of Lorelei, he puts his ship and men at risk against the mobile suits of the Freeden as they try to rescue a woman he found in the Sea of Lorelei. After his ship is badly damaged, be is forced to abandon it and is betrayed by Olba Frost. 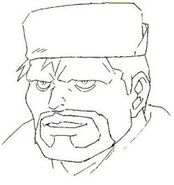 Retrieved from "https://gundam.fandom.com/wiki/Marcus_Guy?oldid=349599"
Community content is available under CC-BY-SA unless otherwise noted.