Maharaja Karn was an admiral with the Zeon forces and is the father of Neo Zeon leader Haman Karn. He was staying at Granada before the end of the war.[1] He is responsible for the Zeon army's exodus to the Axis base after the One Year War, and soon became its regent. He dies of natural causes in U.C. 0083, partly blamed on the machinations of his military aide Colonel Enzo Bernini, who intends to start another war with the Earth Federation. After Maharaja's death, Haman inherits his position as Zabi family retainer at age sixteen.

While he was alive it is hinted at that Maharaja Karn was a supporter of the original Zeon leader Zeon Zum Deikun, and was aware of Char's true identity.[2] 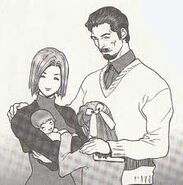