The Magellan-class was a battleship commissioned in U.C. 0070 as part of the Earth Federation's "70s Armament Reinforcement Plan".

The Magellan-class was commissioned alongside the Salamis-class cruiser as part of the Armament Reinforcement Plan in U.C. 0070 and often served as the flagship of a fleet. It had high firepower, with 7 twin mega particle guns and 14 machine gun turrets, but few of them face the rear. When the Magellan-class was first designed and built, all of its weapons were shell-based, but it was later refitted with beam weaponry by the time of the One Year War. As a traditional battleship, it was designed to detect enemies at long distances and attack with long-range beam weapons and guided missiles. However, the use of Minovsky Particles in the One Year War rendered this strategy unusable, resulting in defeat during Operation British and the Battle of Loum.

Initially, the Magellan-class was incapable of carrying mobile suits, but as part of the Vinson Plan the bulge at the bottom of the ship was remodeled into an MS hanger block for simple MS operation capability. It is also able to launch RB-79 Balls from the front of the bridge. However, in order to meet the high demand for mobile suits in actual battle, mobile suits were stationed on the exterior of the deck. This method presented difficulties for maintenance, but it was possible to launch the mobile suits into battle immediately. The Magellan class was eventually phased out after U.C. 0083 and replaced by new ship designs with full mobile suit support such as the Alexandria-class heavy cruisers and the Ra Cailum-class battleships.

Seven twin particle gun turrets are mounted across the Magellan-class, with two at the edge of the bow, three around the base of the bow, and two at the rear of ship, near the thrusters. The two turrets at the back of the ship are the only weapons of the Magellan class which point towards the rear.

14 twin machine gun turrets are mounted around the midsection of the ship.

A small shuttle capable of making atmospheric re-entry is located underneath the bow of the Magellan-class. The shuttle could also double as an escape craft in the case of an emergency. One such use of the re-entry capsule as an escape shuttle was when the Earth Federation’s General Revil used it to escape his crippled flagship, the Ananke, before being captured by the Principality of Zeon’s ace pilots, the Black Tri Stars.

A supplemental rocket booster system can be attached to the main engine thrusters of the Magellan-class to enable it to leaver Earth's atmosphere, including from the underground Jaburo base.

The Magellan-class battleships were authorized as part of the Armament Reinforcement Plan in U.C. 0070, which began in response to the rapid increase in arms at Side 3. The Magellan-class was developed in conjunction with the Salamis-class cruiser, and was the most powerful warship in the Earth Federation Space Force at that time.

At the outbreak of the One Year War, the Earth Federation Space Force fleet commanders were surprised by the Zeon deployment of mobile suits, which could out distance, out shoot, and out maneuver the Space Fleets ships. Fortunately for the Magellan-class, Federation engineers had installed several machine guns on the battleships, but the Magellan fleet still took losses. Early in the One Year War, Fleet Admiral Revil’s flagship Ananke was lost during the Battle of Loum while attempting to prevent a colony drop. Admiral Tianem, commander of the EFSF 4th Fleet lost its flagship Titan while covering retreating Federation Forces after the Battle of Loum. In September Magellan, Admiral Watkins’ flagship, was scuttled at Luna II to allow White Base to escape the facility.

As the One Year War entered its final leg, the Federation began mass production of their first mobile suits. This was a blessing because the Federation’s space fleet would now have mobile suits to counter Zeon mobile suits; however, dedicated mobile suit fighting ships such as the Pegasus-class assault carriers were few and far between. This resulted in several Federation ship classes, such as the Magellan, being pressed into service as makeshift mobile suit carriers for the Battle of Solomon and later on, Operation Star One on A Baoa Qu. After the surrender of the Zeon, the Federations fleet contained just a handful of Magellan-class battleships still in service.

After the One Year War, the Earth Federation set out to rebuild their badly weakened forces, as a sign of strength and a morale booster for the people. At this time, because the Magellan-class had participated in an actual war, Earth Federation engineers realized that there were a number of inefficiencies and flaws in the design. Also the current base design was considered inadequate for combating mobile suits, which were believed to take part in future conflicts. The engineers worked on upgrading the ship's systems and increasing its anti-mobile suit combat abilities. The resulting ship was the Magellan-class battleship (0083 Refit).

In Gundam Sentinel, a few of the original Magellan-class battleships that were not converted to the 0083 Refit were given a less expensive retrofit, resulting in the Magellan Kai-class. This version removed the two turrets at the front of the bow and installed catapult decks along with an MS hangar capable of carrying 12 units. Although the firepower was reduced, it was overall improved due to acquiring full-scale MS operation capability. This version has not been seen in any visual media or outside of the Gundam Sentinel series. 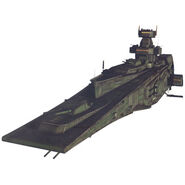 A destroyed Megallan-class as seen on Gundam 0083 OVA