A kindly Diver who volunteers as a navigator, helping beginner Divers who have just started GBN to enjoy playing the game. Matching the impression given by his appearance, Magee instantly brings people together and catches them up in his own pace.[1] Besides being a sanctioned GBN navigator, he is also currently ranked 23rd for best GBN Diver in the world.[2] He is a member of the Adam's Apple force.

One of GBN's veteran Divers, although he hates being referred to that way. Magee operates his own bar within GBN, where he exchanges information with anyone, whether beginners or higher-ranked players. In particular, he seems to have a special relationship with May.[3]

Magee has achieved the following awards and rankings.

Magee was a spectator at the 14th Gunpla Force Tournament Finals match between Avalon and the 7th Panzer Division. He was at a concession stand when Avalon's victory was announced [4].

Some time later, Magee meets new GBN players, Riku and Yukki. After introducing himself, Magee gave the pair a tour of GBN and helped navigate them through their first mission. Subsequently, the boys received an SOS that led them to a girl named Sarah in the middle of an icy wasteland. As Magee instructed them to use Guest Mode to bring her back in their Gunpla, suddenly, another Diver, Do-ji appeared behind them, claiming a stomach ache. As Riku impulsively fell for his ploy, Magee and Yukki realized too late that he was being tricked into choosing Free Battle Mode. He immediately identified Do-ji as the Divers targeting beginners, to which Do-ji smugly boasted that his actions weren't technically against the rules. Magee urged the boys to Battle Out, vowing to avenge them, but Riku refused to back down. As the boys' teamwork resulted in their victory, Magee ended up hugging them in a tearful embrace upon their return to the Lobby Tower.[5]. 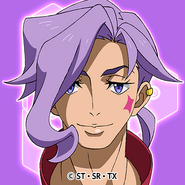