One of the leading MS workshops in the Earth sphere, run mainly by the Madorna family, including Mukured Madorna, a genius engineer who used to be a racer, his wife Lalaparly, and their son Rody in Part 2. The factory ship "Madorna Factory Ship", a large vessel with a total length of 2km [1], is used as their home and workshop, and is usually anchored in the space colony Fardain, but since they can move freely, they do not have a permanent home.

It's a workshop that Mukured built up and grew over the course of a generation, and its technology is so powerful that Yark Dole brought it in to strengthen the xvv-xc Zedas. Even taking into account the restrictions imposed by the "Silver Chalice Treaty", it boasts superior technology to that of the Earth Federation Forces. Although it ostensibly builds civilian machines for racing and other purposes, it is also engaged in the illegal development of MS for military use, and in addition to repairing and reinforcing the MS of the Earth Federation Forces, it accepts work from private companies, former national factions, and even anti-federation forces.

By 164 A.G., the first head of the workshop, Mukured, has passed away, and his son, Rody, has run away from home to join the Earth Federation Forces to train as an engineer, so Mukured's wife, Lalaparly, is in charge. 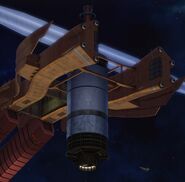