The MWF-JG71 Raysta is a Mobile Suit in the manga series Gundam SEED Astray.

The Raysta is a civilian use MS produced by the Junk Guild for work purposes, and is relatively cheap as it is assembled from salvaged materials, with about 40% of its parts originating from the MBF-M1 M1 Astray. It has no fixed weaponry as it is not supposed to be used for combat, however, it can use weapons from other mobile suits like beam rifles or bazookas when required, such as during self-defense. The suit is designed to carry additional equipments on its back as well as on various hardpoints through out its body, it can also transform its legs into claws for moving heavy objects. Quite a number of owners have customized their Raysta to their liking or for work purposes, and one of the most popular customization is to switch the suit's original head for a Gundam-like head, which also grants the suit with better head-mounted sensors.

Yoon Sefan, the creator of the Raysta, pilots a custom Raysta which is assembled using a higher proportion of M1 Astray parts. As a result, her suit has better performance than normal Raysta. Her Raysta also has a different color scheme and head unit, and is usually equipped with a specialized backpack as well as detachable storage containers on the hips and legs. As for photojournalist Jess Rabble, besides using a Raysta with a Gundam-like head, he also equips the suit with a handheld Gun Camera for taking photos over large distances.

The bazooka fires explosive shells, as it is a conventional weapon, it does not draw power from the Raysta's battery and this results in extended combat endurance.

A special handheld equipment used by Jess Rabble's Raysta. Despite its name, the Gun Camera is used to take pictures when the Raysta is in the battlefield.

In CE 71, former Morgenroete technician Yoon Sefan (who was also employed by the Orb Union in the Astray project) joins the Junk Guild and, together with several quantum computers, designs a civilian-use mobile suit, which she calls the Raysta. The name "Raysta" is an anagram of "Astray", which is due to the fact that it was made mainly out of salvaged MBF-M1 Astray parts. The Raysta is eventually mass-produced by the Junk Guild and they are either rented out or sold to civilians, on the condition that these mobile suits not be refitted with weapons or used for any violent purposes. Over time, several owners of the Raysta modify their suit for their own needs.

During the South American War of Independence in December CE 71, Yoon and her custom Raysta unintentionally stumbled into a battle between a ZGMF-X999A ZAKU Mass Production Trial Type, piloted by ZAFT pilot Courtney Heironimus and a group of GAT-02L2 Dagger L units belonging to the Earth Alliance. Yoon was however rescued by Barry Ho, who briefly piloted Yoon's Raysta to battle Courtney before escaping.

Another Raysta was piloted by photojournalist Jess Rabble, whose unit was outfitted with a Gundam head. Jess used his suit to secretly make photos of the Junk Guild-controlled GENESIS Alpha. He was however quickly captured and offered the ZGMF-X12 Astray Out Frame by Lowe Guele, which Jess eventually accepted. This was mostly due to the fact that his Raysta was damaged by Gai Murakumo and his MBF-P03secondL Gundam Astray Blue Frame Second L and Lowe gave it to Jess as an apology.

In late CE 73, the Junk Guild's headquarters at GENESIS Alpha was attacked by Earth Alliance forces, so the Guild equipped their own Raystas with bazookas and beam rifles to assist in the defense. 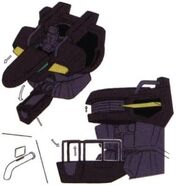 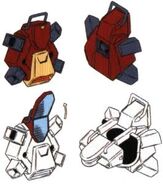 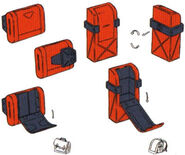