The MVF-M11C Murasame is a next-generation mass production mobile suit developed by the Orb Union and like its predecessor, the MBF-M1 M1 Astray, it can be used on earth and in space. The most distinguishing feature of the suit is its ability to transform into a highly aerodynamic MA mode, granting it superb aerial mobility and atmospheric flight capability that is superior to the M1 Astray Shrike. The MA mode also grants the suit with additional speed while on earth and in space. Even without transforming into MA mode, the Murasame is capable of aerial combat by deploying its wings and tail stabilizer during MS mode.

Weapons wise, the Murasame is a well balanced suit, featuring a mix of shell-based and beam-based weaponry. It is armed with air-to-air missiles in its front skirt armor, CIWS guns in its head and wings, a beam cannon in its tail stabilizer, a beam saber stored in its left side armor, an arm-mounted shield and a handheld beam rifle. The suit can also carry various types of missiles on its wings' hardpoints. The Murasame's high performance allows it to hold itself against the newest mass production type mobile suits deployed by Earth Alliance and ZAFT, and with the right pilots and group tactics, can even take down high performance prototype mobile suits, like the ZGMF-X24S Chaos Gundam.

The Murasame has a total of six 12.5mm CIWS, two in its head and another four on its wings (two per wing). These CIWS are mainly used to shoot down incoming missiles or to deter closing in enemy units. The head-mounted CIWS are usable only in MS mode, while the wing-mounted ones are usable only in MA mode.

For close combat, the Murasame is equipped with a beam saber, which is usually mounted on the suit's left side armor when not in use. The Type 70J Kai Beam saber is an improved version of the beam saber used by M1 Astray, it has a longer operating time as it consumes less energy, and has better reliability as well as being easier to maintain.

Mounted in the tail stabilizer, this beam cannon is usable only in MA mode and its power is comparable to that of the suit's beam rifle.

Besides the high-energy beam cannon, the only other ranged beam weapon of the Murasame is a Type 72 Kai "Ikazuchi" beam rifle. The beam rifle is stored on the right side armor when not in use or during MA mode. It is usable in both MS and MA mode, in the latter mode, the beam rifle is facing the front due to the repositioning of the side armor and can be fired without its trigger being depressed.

Another ranged weapon of the Murasame are its four anti-air missiles, which are stored in its front skirt armor (two missiles per armor). These missiles are mainly used during MA mode.

The main defensive equipment of the Murasame, the shield is mounted on the left forearm or handheld when in MS mode. In MA mode, the shield serves as the nose unit, and has a pair of retractable canard wings and a landing gear for use in this mode. If the shield is lost, the suit cannot transform into its MA mode and is stuck in its MS mode.

Guided heavy anti-ground target missile mounted on hardpoints on the underside of the suit's wings. It is only usable during MA mode and is the same weapon as that used by the Earth Alliance's Jet Striker.

Missile pod that each holds three anti-air "Würger" missiles that is mounted on the underside of the suit's wings. It is only usable during MA mode and is the same weapon as that used by the Earth Alliance's Jet Striker.

The MVF-M11C Murasame is a transformable mobile suit designed by the Orb Union as a successor to their earlier Astray series, created some time after the first War. During the second war, a large number of these suits were used by Orb during many battles against different factions, during which they proved themselves to be a powerful unit. A yellow colored Murasame was first piloted by Andrew Waltfeld then passed on to Ledonir Kisaka.

At least 20 Murasame units were stationed on the massive aircraft carrier Takemikazuchi. After the sinking of the ship, at least six Murasames were among the Orb forces which boarded and joined the crew of the independent battleship Archangel.[1] The Archangel itself already carried a single Murasame aboard piloted by former ZAFT ace Andrew Waltfeld and painted in his red and gold "Desert Tiger" colors. Waltfeld used his during a three way battle between the Archangel, ZAFT and the joint Earth Alliance/Orb forces.[2] This unit was later piloted by Ledonir Kisaka to defend Orb against a ZAFT invasion.[3] During the battle, a Murasame inadvertently killed Yuna Roma Seiran when the GOUF Ignited it had shot down fell on top of him. The Murasames were also present in the last space battle of the second war between ZAFT and the Three Ships Alliance.

During the Second Alliance-PLANT War, the famous TSA MS pilot Jean Carry had upgraded from his old Astray to a white colored Murasame. When Orb was under attack, a squadron of Murasames led by Carry in his custom-colored suit, attacked ZAFT ships and MS units, and assisted in the defense of the Archangel. Later, when the Archangel headed up to space, Jean's Murasame joined the eight mobile suit complement of the ship, and led a squadron of Murasames and ZAKU Phantoms from rogue ZAFT ships in an attack against Messiah.[4]

Over time, Orb created two variants of the Murasame, both which however were largely similar to the mainstay unit. The variants were the MVF-M11C Murasame Reconnaissance Type, created for recon missions, and the MVF-M12A Ootsukigata, a space variant with a slightly different setup for long-range support.

On standby in MA Mode (Return to the Battlefield, HD Remastered)

Launching from the Takemikazuchi in MA mode (Sword of the Blue Skies, HD Remastered)

Flying in the air (The Shadows of War, HD Remastered)

About to fire Type 66A Air-to-air Missile "Hayate" (The Shadows of War, HD Remastered)

In the Archangel's hangar (A Fleeting Dream, HD Remastered)

Sliced in half (Freedom and Justice, HD Remastered) 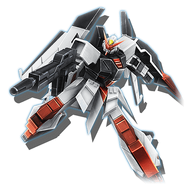 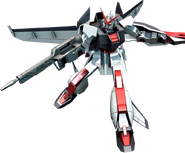 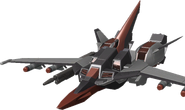 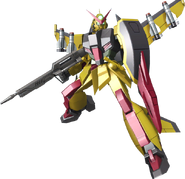 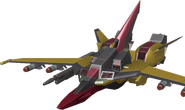