The MSZ-013 Mass Production Type ZZ Gundam is a mass production variant of the MSZ-010 ΖΖ Gundam introduced in the M-MSV design series.

A simplified, mass production version of the ZZ Gundam developed by Anaheim Electronics. Its head is equipped with a visor reminiscent of the GM series, but underneath it is a set of twin eye sensors. While the core block system and transformation mechanisms are omitted to reduce cost and for ease of production, the Mass Production Type ZZ Gundam still retains the high firepower concept of the ZZ Gundam and is equipped with various beam weaponry, missiles and hand grenades. A rotatable hardpoint is also added to each shoulder for mounting optional equipment, and one such example is the optional weapon pod that further increases the mobile suit's attack power. Overall, the Mass Production Type ZZ Gundam has exceptional offensive capabilities for a mass production type machine. However, a high-output generator is required to power the mobile suit's weapons, causing its production cost to increase and this led to the project's termination after four prototype units were built.

Mounted in the head, the pair of shell firing weapons have a high rate of fire but little power and can't damage the armor of a mobile suit, though it can damage lightly armored areas such as the sensors. They are ideal for shooting down small, lightly armored targets such as missiles, attack vehicles, etc.

Mounted in the center of the head. Like the ZZ Gundam's high mega cannon, the simplified high mega cannon can seriously damage a mobile suit with even a glancing hit, or destroy a standard mobile suit shield making it impossible to block the beam. However, due to a cost-saving measure, it only has a two shots limit.

Located on the chest, it can emit multiple energy beams that can easily destroy an enemy unit in one shot. It can be fired in tandem with the simplified high mega cannon, creating a huge beam and is the mobile suit's strongest beam attack. However, this attack can overload the mobile suit, destroying its entire upper body.

A 3-tube micro missile pod is equipped on the the left side of the waist.

A pair of missile pods are equipped on the top of the backpack.

A pair of hand grenades are stored in the forearms.

The beam saber is a small device held in the mobile suit's hands when operated and is powered by a rechargeable energy capacitor. It is capable of cutting through any armor not treated with anti-beam coating. The Mass Production Type ZZ Gundam has two beam sabers stored on the side of its waist.

A pair of optional weapon pods mounted on both shoulders' rotatable hardpoint. Each weapon pod is equipped with a 3-tube micro missile pod and a beam cannon that also doubles as a hyper beam saber when removed from the pod. The hyper beam saber emits a beam blade that is longer and larger than a normal beam saber.

The standard ranged armament of the many mobile suits is the beam rifle. The particle beam fired from a beam rifle can penetrate almost any armor not treated with specific counter-measures. This particular model resembles a single barreled version of the ZZ Gundam's double beam rifle.

In U.C.0094, a Mass Production Type ΖΖ Gundam piloted by Fresberg Corps member Braier Ryude was deployed for technical tests with the MSN-001X Gundam Delta Kai at Area X of the Mariana Base. It also participated in search operations for Zeon Remnants with the Gundam Delta Kai. It is later boarded by Ing Ryude during the battle at Devil's Nest. 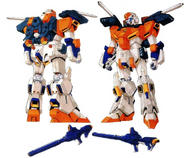