The MSZ-010S ZZ-GR is a mobile suit that appeared in the 3DCG animation Gundam Evolve episode 10 and was designed by Masato Ichishiki.

After the end of the First Neo Zeon War, the Enhanced ZZ Gundam's lost Core Base was replaced with newly designed B parts so that it could function once again. The difference in the upper body's armor shape is due to post-war renovation.[1] The ZZ-GR's backpack has five propellant tanks for long duration travelling, and except for the two propellant tanks at the sides, the other three are fitted with thrusters at their ends.[2][3] The ZZ-GR's legs have similar shape as those of the Earth Federation Forces' GM series.[2] Its soles are fitted with thrusters, while its knees are fitted with a propellant tank each.[2] Despite carrying a large amount of propellant, the ZZ-GR should still not overuse its thrusters or it might end up being unable to return to its mothership, the Jupitris II.[4]

Mounted in the center of the ZZ-GR's head is a high mega cannon. However it is unable to function properly.

As with many mobile suits, the ZZ-GR has head-mounted Vulcan Guns, specifically a pair of 60mm double vulcan guns, for a total of four guns and they are loaded with 400 rounds. They are mainly for intercepting incoming missiles/rockets, destroying mobile suit sensors, and engaging lightly-armored vehicles. They are operable in mobile suit mode only.

The primary ranged weapon of the ZZ-GR, the double beam rifle is powered by a built-in small generator and can also be supplied with energy from the mobile suit. The beams from each individual barrel have a power rating of 10.6 MW for a combined total of 21.2 MW.

The beam saber is a small device held in the mobile suit's hands when deployed and is powered by a rechargeable energy capacitor. It emits high-energy Minovsky particles to form a blade-shaped I-field (via manipulation of electromagnetic fields), and then fills this I-field shell with superheated Minovsky particle plasma to produce an effective cutting blade. The ZZ-GR stores a pair of beam sabers on its backpack.

Defensive armament that is equipped on both forearms.

After the end of the First Neo Zeon War , the severely damaged MSZ-010S Enhanced ZZ Gundam was recovered and fitted with a new lower body to replace the lost Core Base, becoming the MSZ-010S ZZ-GR. This new lower body was built on the Jupitris II, flag ship of the Jupiter Fleet with which Judau had departed with in the end of Mobile Suit Gundam ZZ.

Somewhere between Jupiter and Earth, Judau Ashta was using the ZZ-GR to keep a watch over the Jupiter Fleet when he was alerted to multiple high speed objects on an intercept course. Judau moved to intercept and discovered several Neo Zeon remnant mobile suits standing on flight platforms attacking an AMX-004 Qubeley Mk-II. Judau used the ZZ-GR to engage two AMX-014 Döven Wolfs, destroying them. The Qubeley Mk-II also turned to also engage the enemy, but Judau used the ZZ-GR to keep it off the battlefield, pushing the it away until the ZZ-GR ran out of fuel.

As the Qubeley Mk-II turned and flew to the Jupitris II, a small container bearing the words "Happy Birthday Judau" approached the ZZ-GR. The container then opened to reveal a Core Base unit, and Judau exchanged the ZZ-GR's lower body with it, restoring the Enhanced ZZ Gundam. With the Enhanced ZZ Gundam, Judau flew back to the Jupitris II and destroyed several MS-06F Zaku IIs and the remaining Döven Wolf. 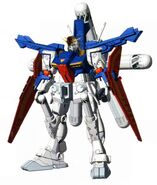