The MSZ-010S (MSZ-010B) Enhanced ZZ Gundam is a field upgrade of the MSZ-010 ΖΖ Gundam and is piloted by Judau Ashta.

Near the end of First Neo Zeon War, the ΖΖ Gundam was modified into the Enhanced ΖΖ Gundam. Its balance was adjusted and new armor added. In consideration of the increase in dry weight due to additional armor, the shoulder thruster binders are replaced with higher performance version, thrusters throughout the body are enhanced, and thrust strengthening packs are added to the rear leg nozzles. The suit's backpack was also changed to a larger type and the backpack's main engine is retrofitted with four new thermonuclear jets/rockets, resulting in greatly improved mobility.

While the original had 21-tube missile launchers on the backpack, limited to one missile per launch tube, the Enhanced ZZ replaced them with a pair of 18-tube missile launchers, with each tube carrying a two-missile magazine for additional salvos. The armor has beam-resistant coating with fluorine resin, making it possible to withstand a direct hit of about a few seconds from low power beams. Anaheim Electronics further upgraded the mobile suit with additional external armor, tested in the FA-010A FAZZ, and weapons into the FA-010S Full Armor ZZ Gundam, which corrected its structure problem.

As with many mobile suits, the Enhanced ZZ Gundam has head-mounted Vulcan Guns, specifically a pair of 60mm double vulcan guns, for a total of four guns and they are loaded with 400 rounds. They are mainly for intercepting incoming missiles/rockets, destroying mobile suit sensors, and engaging lightly-armored vehicles. They are operable in mobile suit mode only.

The primary ranged weapon of the Enhanced ZZ Gundam, the double beam rifle is powered by a built-in small generator and can also be supplied with energy from the mobile suit. It possesses two barrels that need to be replaced every 200 shots, and a cockpit at the back. The beams from each individual barrel have a power rating of 10.6 MW for a combined total of 21.2 MW. The output and convergence rate of the beam can be manually adjusted. The double beam rifle mounts on the main body when the Enhanced ZZ Gundam is in G-Fortress mode or when the Core Top is separated, however the barrels are rotated backwards and positioned underneath the body while its cockpit will face forward. This cockpit can be used to pilot the G-Fortress or the Core Top but is inoperable in mobile suit mode, so anyone in the double beam rifle's cockpit when the Enhanced ZZ Gundam transforms is essentially stuck on the butt of a dangerous beam rifle.

A destructive beam weapon mounted in the center of the Enhanced ZZ Gundam's head. It has a power rating of 50 MW, making it the most powerful beam weapon used by a mobile suit during the First Neo Zeon War, and one of the most powerful weapon ever mounted on a mobile suit. However, the cannon's power is also a weakness as the ZZ's reactor is unable to handle repeated usage of the weapon. The high mega cannon is operable in mobile suit mode only.

The Enhanced ZZ Gundam stores a pair of hyper beam sabers on its backpack. The hilts of these beam sabers are easily three times larger than other beam sabers' during the First Neo Zeon War. The weapon emits a much longer and more powerful blade that can easily cut through several mobile suits in a single swing. Its blade length of about 1.5 times that of regular beam saber's also makes it possible to easily break armor made of Gundarium alloy. The Hyper Beam Sabers double as beam cannons when attached to the backpack. The beam cannon mode can be used in MS form, G-Fortress mode or when the Core Base is separated. The Hyper Beam Saber has a power rating of 1.1 MW each, while the beam cannon mode have a power rating of 10 MW each. In episode 10 of Gundam Evolve, the beam blade of the Hyper Beam Saber demonstrated the ability to extend and function like a whip and the beam cannon function is also usable when handheld.

The Enhanced ZZ Gundam mounts a pair of shields on its forearms. They also serve as wings/control surfaces for the G-Fortress and Core Top to increase mobility in the atmosphere.

A technological variant of the Psycommu System developed by Anaheim Electronics. Although its full capabilities are unknown, its primary purpose was to allow a Newtype pilot to more easily interface with his mobile suit via mental commands. The bio-sensor could also have a rather surprising side effect when the pilot was mentally and emotionally focused enough (usually when angry or upset) to cause the bio-sensor to amplify the power, speed and strength of the mobile suit for a short period of time.[1]

After Judau and a number of AEUG members "hijacked" the SCVA-76 Nahel Argama, they arrived on Axis right in the middle of civil war between Haman Karn and Glemy Toto's followers. The conflict soon became a three-way battle, with Judau facing various new powerful units like the AMX-014 Döven Wolf and NZ-000 Queen Mansa. The ZZ Gundam was in need of an upgrade.

It had long been decided (even before the ZZ Gundam was finished by one year) that to fix the unit's inherent weak structure, a full armor option was needed. However, some minor improvements to the ZZ itself must be made before the full armor components can be applied. The upgrade re-designated the Gundam to be MSZ-010S Enhanced ZZ Gundam.

When the unit was upgraded is unknown, because Astonaige Medoz introduced Judau directly to the Full Armor ZZ Gundam. However, during the last battle with Harman in her AMX-004 Qubeley, Judau ejected the external armor and fought in the Enhanced ZZ Gundam in order to increase speed and maneuverability. The fight resulted in a draw with both machines disabling each other, however the war was over as Haman Karn couldn't hope to escape the surrounding Federation forces with her damaged Qubeley. Ultimately, instead of surrendering Haman crashed the Qubeley into an asteroid fragment destroying both the mobile suit and herself. 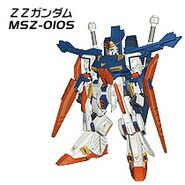 As featured in Gundam Evolve Vol. 10 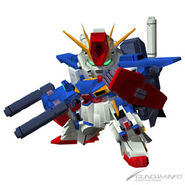 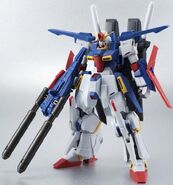 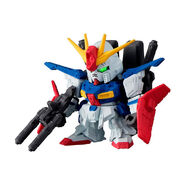