The MSZ-010A1 Theta Plus is a transformable mobile suit featured in Mobile Suit Moon Gundam.

The MSZ-010A1 was a transformable mobile suit used by Londo Bell. Designed as part of the Theta Project, it combined elements of the MSZ-010 ΖΖ Gundam and FA-010A FAZZ. Unlike the FAZZ, the Theta Plus could transform into G-Fortress mode. Like the ZZ Gundam, the Theta Plus utilized the Core Block System, with the FXA-07GB-3 Core Fighter (Theta Plus Model) at its center. The Theta Plus’ main armament was a hyper mega cannon similar to the FAZZ’s. However, this version was equipped with a disk radome for improved accuracy. The Theta Plus was also armed with vulcan guns, beam sabers, beam cannons and micro-missile launchers. The micro-missiles were designed to serve as a countermeasure against mobile suits equipped with I-fields. With its heavy firepower, the Theta Plus could fill multiple mission roles, including reconnaissance, base capture and mid-range fire support.

Like the original ZZ Gundam the Theta Plus is equipped with a pair of beam cannons that double as the mobile suit's beam sabers.

The primary ranged weapon of the Theta Plus, is a enhanced version of the FA-010A FAZZ main weapon. The improvements include a 60% output increase equaling it to the main gun of a battleships, the ability to continually fire if the pilot set a interval every few seconds, incorporating the functions of a beam smart gun, and improvising accuracy by linking with a disc radome. 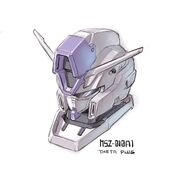